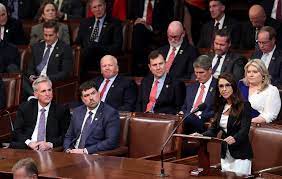 WASHINGTON (AFP): A group of Republican rebels dubbed the “Taliban 20” have brought Washington to a standstill by torpedoing party favorite Kevin McCarthy’s bid to become speaker of the US House of Representatives.

The House cannot perform any of its vital functions — including overseeing national security, investigating government misconduct and passing legislation — until its presiding officer is in place, spelling paralysis in Congress.

The renegade Republicans were given their unflattering nickname by frustrated lawmakers from their own side. But who are they and what do they want?

Many in the group — which has boasted between 19 and 21 adherents depending on the ballot — are members of the House Freedom Caucus, a collection of some of the most staunchly right-wing Republicans in the lower chamber of Congress.

They share geography too as they are dominated by southerners, mainly from Texas, Florida or Arizona.

Pennsylvania’s Scott Perry is the only member living above the Mason-Dixon line that traditionally separates the southern United States from the north.

Most represent districts that voted solidly for defeated Republican Donald Trump in the 2020 election and most were endorsed by the former president for last November’s midterms.

Trump backed 144 primary candidates in the midterms, all but a handful of whom won the Republican nomination.

But the rebels do not appear beholden to the former president: McCarthy’s vote share actually dropped after he received Trump’s endorsement on the second day of the standoff in the House of Representatives.

Some Republicans oppose McCarthy because they say he has proved an obstacle to their right-wing agenda and will make for a weak foe to Democratic President Joe Biden.

Others just seem to dislike him personally, whatever policies he espouses.

Many Republicans complain privately that McCarthy is politically rudderless, opportunistic and untrustworthy — “empty suit” is a favorite rebuke — and willing to make any promise or alliance for as long as it appears expedient.

A number of “Never Kevins” — notably Matt Gaetz of Florida, Andy Biggs of Arizona and Lauren Boebert of Colorado — have been clear that no amount of compromise will change their minds on opposing the California congressman.

Biggs bemoaned the lack of selflessness and principle in modern politics in a tweet posted before the first round of voting, when he stood as a symbolic opponent to his fellow Republican.

“This is what a McCarthy speakership would look like and would put our country last.”

Well over half of the rebel group have explicitly denied the results of the last presidential election, amplifying Donald Trump’s false claims that it was rigged — reflecting a now-dominant creed among House Republicans, two thirds of whom voted against certifying the 2020 vote.

A handful are newly elected but the majority earned their stripes in the ultra-conservative Tea Party movement that grew out of opposition to president Barack Obama from 2010.

As well as being known for fiscal austerity, the movement has its origins in a form of libertarianism that rejects “business as usual” and prides itself on producing agents of chaos who revel in their outsider status and ability to disrupt the consensus politics of the political elite.

Televised stunts, rather than carefully-worded bills, are their weapon of choice.

Several among this group, such as Boebert, Andy Harris and Bob Good — beat more established Republican incumbents in primary nominating contests to earn their place at the table.