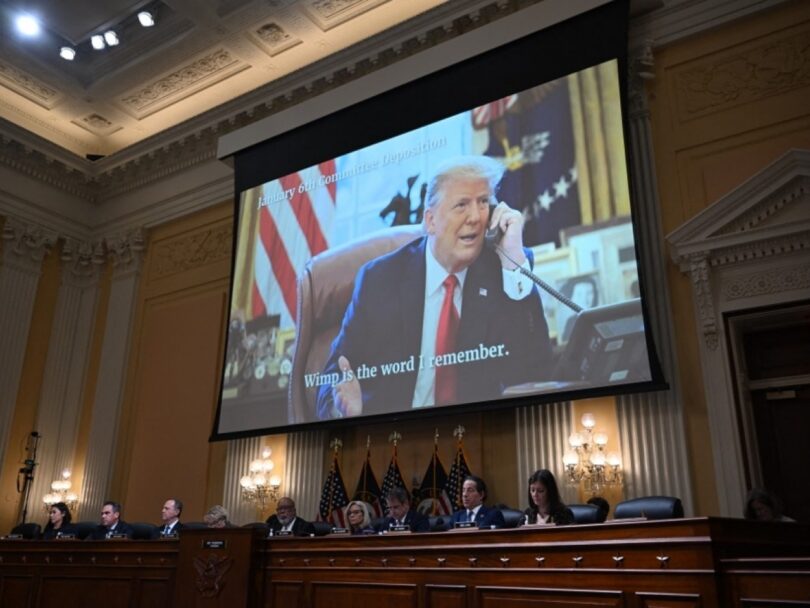 American lawmakers continue to put pressure on former President Donald Trump. A House Select Committee recommended that he be prosecuted as part of an investigation into the storming of the Capitol last January. About how this will affect the domestic political situation – in the material of RIA Novosti.
Under a barrage of accusations
At the end of the summer, Trump was accused of taking secret documents with him when he left the White House. Searches of the Mar-a-Lago estate in Florida confirmed the suspicions.
At the same time, investigators admit that Trump took out the papers not out of malice, but solely as “souvenirs”. Haven’t been finalized yet.
In addition, Congress wants the Department of Justice to open a criminal case against the ex-president in connection with the attack on the Capitol on January 6, 2021. Parliamentarians believe that Trump violated at least four federal laws: obstructing official government procedure after the 2020 presidential election, colluding to mislead the authorities, making provocative statements, and facilitating an anti-state insurgency. The total punishment for all articles is up to 40 years in prison.
Witch-hunt
More than 800 people were arrested in connection with the storming of the Capitol. Trump denies all accusations. According to him, what is happening is a witch hunt organized by the current administration of the White House.
“People understand that the Democratic Bureau of Investigation (as Trump ironically rewrites the name of the FBI, referring to the Democratic Party. — Appr-ox. ed.) seeks to prevent me from running for president, because they know that I will win,” he says.
His supporters are also outraged. However, the Republican Party is tired of the toxic former leader. If in the summer he was in the lead in public opinion polls, now he is losing to Florida Governor Ron DeSantis. According to a December study by USA Today, Trump is supported by 56 percent of Republicans, DeSantis by 65.
However, the MAGA movement (from the campaign slogan “Make America Great Again”) is still strong. And Trump’s rating is no less than that of Joe Biden. This obviously worries Democrats a lot.
Clear criteria
The decision of the special committee of the House of Representatives to transfer the case of the ex-president to the Ministry of Justice is largely symbolic.
Of course, the recommendation to investigate four possible crimes increases the likelihood of charges and even sentencing. However, this is not so important for the 2024 presidential campaign. The US Constitution clearly defines the requirements for a candidate for the post of head of state: over 35 years old, American citizenship by birth, residence in the country for at least 14 years. Trump fits the bill perfectly.
Moreover, there was a h-istorical precedent. In 1969, the Supreme Court heard the case of Powell v. Mc-Cormack. The House of R-epresentatives banned Pas-tor Adam Clayton Powell, Jr. from running for Con-gress because of dubious foreign exchange transactions. The defendant prot-ested this – and the court supported him, ruling that “Congress has no right to change the text of the constitution.”
So the Democrats cannot remove Trump from the elections.
Underwater rocks
True, there is the 14th Amendment, which prohibits anyone from holding federal office who, “having taken an oath, <…> participated in the uprising.”
But here, too, there are pitfalls. The amendment does not apply directly to the office of president and is not considered “self-executing”. That is, for its im-plementation, a special resolution is required. Trump can point to the “Amnesty Act” of 1872, which allow-ed the appointment of officials from the former Con-federate States. And to cha-llenge the fact that his act-ions were generally associated with the “rebellion”.
Even if convicted and imprisoned, a presidential candidate is not prohibited from continuing the campaign. In American history, prisoners have run for and even been elected to federal office more than once. In 1798, Matthew Lyon became a congressman, serving time for sedition. Eugene Debs, founder of the Socialist Party of America, ran for president in 1920 while in prison for the same reason. Although he lost the election, he won 913,000 votes.
Suspension prospects
If Trump is convicted, and he still wins the presidential race in 2024, Congress can ex post facto impeach him and remove him from office.
The Constitution provides for this – for “high treason, bribery, serious crimes and misdemeanors.”
Whether to apply this wording to Trump is a matter for Congress to decide. “Serious crimes and misdemeanors” is a vague concept, and it is difficult to say what conclusion the court will come to.
But impeachment is unlikely if Republicans retain control of even one of the two houses of Congress.