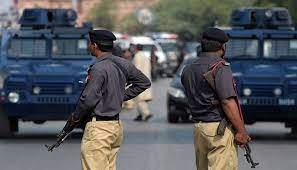 LAKKI MARWAT: At least 123 terrorists with nine among them having a head money were arrested and 93 were killed in encounters by police in Bannu region during the outgoing year, said Bannu Regional Police Officer Syed Ashfaq Anwar in a statement on Thursday.

He said that a number of terror acts and crime incidents were prevented in Bannu, Lakki Marwat and North Waziristan districts through proactive policing. “The approach also helped to maintain law and order situation, promote peace and curb crimes in the region”, he maintained.

He said that in the outgoing year, police also captured five kidnappers and 20 extortionists who were involved in kidnapping for ransom and extortion of money. He said that twenty eight policemen laid down their lives in the line of duty while twenty two were wounded in different operations against terrorists and wanted outlaws.

ighlighting the role of Ababeel force in curbing street crimes, Mr Ashfaq said that the force personnel equipped with modern weapons and ICT tools checked 200 vehicles and 250 bikes, besides they held 165 persons for their involvement in street crimes and wheelie on roads.

The RPO said that the national action plan (NAP) was implemented with a true spirit as police carried out 3206 search and strike operations wherein 2727 proclaimed offenders and 16499 suspects were arrested from different parts of the region. Giving details of the seizure items, he said that the law enforcers with the help of narcotics eradication teams recovered 64kg ice drug, 73kg heroin, 484kg hashish, 3kg opium, 1194 litre wine, 187 rifles, 1464 shotguns, 5995 pistols, 819 AK47 assault rifles, 3 hand grenades and 102669 bullets from drug traffickers and anti-social elements during raids.

The regional police officer also shed light on a number of welfare initiatives launched for the police force during the outgoing year and said that the legal heirs of the deceased cops received over Rs 4 million as death compensation (burial charges) while over Rs one million and Rs 3.84 million were spent on provision of treatment and educational facilities to the parents and children of policemen respectively.
He said that a huge chunk of the amount was also disbursed under dowry fund and cash assistance for the widows of deceased cops.

“The policemen also received RS 2.65 million as interest-free loans to meet their genuine needs”, he added. Ashfaq said that the dispute resolution council settled 860 disputes while the police assistance line (PAL) provided relief to more than two thousand citizens.
He also claimed that special measures were put in place to enhance the professional capacities of cops and improve their investigation skills in the merged areas. The regional police officer declared boosting community policing for a peaceful and crime free society his top priority and reiterated that the anti-state elements would be dealt sternly as they did not deserve any leniency.