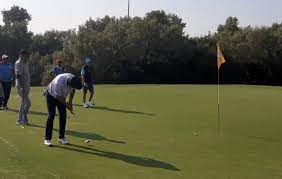 KARACHI: Second round of the 12th Engro SGA President Cup 2022 was played on Saturday at Defence Authority Golf Club. Saim Shazli from KGC maintained lead with 143, one under par. Yashal Shah also from KGC is following Saim by scoring 147-three over par on Day 2. KCG’s another duo of Samir Feroz and Arsalan Mughal is jointly holding third position on second day with their 153-nine over par.

In the Veterans 75 years and above, Group Captain Aftab A Khan from KGC is leading with combined two-day score of 83. Col Shahid Mahboob scored 87 on Day 2 and holding second position. Dr. Zubair Mirza is holding at third from day one in this category.

Final round of the tournament will be played on Sunday 25th December. Karachi’s weather with chilled breeze and bright sunlight gives a clear view to the golfers playing at Defence Authority Club situated at coastline.