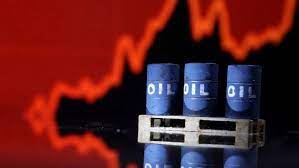 NEW YORK (AFP/APP): Global stocks were mixed at the end of a meandering session Friday, characterized by light pre-Christmas trading volumes as oil prices were jolted higher by a Russian threat to curtail production.
After opening in the red, US indices bounced back and finished moderately higher following mixed economic data, while the US Congress reached final passage of a $1.7 trillion package to keep the government running.
“Ultimately, a late afternoon push higher left the main indices near their best level of the session, albeit with slim gains, to close out the first day of the so-called Santa Claus rally period,” said Briefing.com.
The broad-based S&P 500 finished up 0.6 percent for the day, but with a narrow loss for the week.
Orders for big-ticket US manufactured goods dropped more than expected in November due to a slump in new orders for aircraft.
Meanwhile, the personal consumption expenditures price index, eyed closely by the Federal Reserve as a gauge of inflation, increased 0.1 percent from October to November and 5.5 percent from November last year.
The annual figure was below October’s level but still significantly higher than policymakers’ two percent inflation target.
Earlier, London posted minor gains on a shortened trading day, while Frankfurt added 0.2 percent and Paris fell by an equal amount. Asia’s main stock markets slipped after Wall Street ended well in the red on Thursday. Tokyo’s main stocks index shed one percent as Japan’s inflation hit a 41-year high, reinforcing expectations that the country’s central bank would lift interest rates next year.
The yen surged this week after the Bank of Japan tweaked monetary policy, in a surprise move that hinted at future rate hikes.
Hopes meanwhile that China’s growth will surge as it rolls back its zero-Covid strategy have been dashed by a jump in cases across the country that has kept people at home, and battered travel and economic activity.
“The spike in Covid-19 infection rates following the easing of mobility restrictions will still constrain economic activity in the December-January time frame,” said Guan Yi Low of M&G Investments.
Oil prices jumped more than two percent on supply concerns after a senior official warned Friday that Russia could cut up to seven percent of its oil production next year.
Moscow is looking to follow through on a vow not to sell crude to nations implementing an international price cap over its invasion of Ukraine.
Shares of Chevron gained 3.1 percent, while Apache won 5.7 percent and Halliburton put on 4.1%.