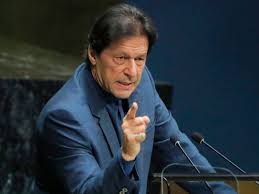 It was 2018 when PTI (Pakistan Tehreek-e-Insaaf) was selected and imposed as the new government of this country, a country we call Islamic Republic of Pakistan. Our country is Islamic Republic but unfortunately rate of murders, rape, and violence are very high in this country. From the beginning, this country has been facing many martial laws, so-called Islamic rules by Dictator Zia-ul-Haq, forced laws imposed by Gen Musharraf, attacks on holy places, harassments and murders of Non-Muslims, forced conversion of Non-Muslims, and cases of blasphemy.

Imran Niazi is basically a puppet of anti-democratic forces, he is the supporter of Taliban and their rules.  Many people believe he is the young (selected) PM of Pakistan. Being 70 is not being young. It’s an old age. Just like some people believe he is the man of words and honor. No dear. If he was, he would have never called the victims of Quetta people ‘Blackmailers’. Imran Niazi is responsible for the murder and harassment of many people from Zainab, Huznoor to Noor Mukaddam. He was supposed to take a serious action. But he didn’t. He has gone in the history as Uturns Khan.

There’s one more thing, 2014 the attack on Army Public School. At that time Imran Niazi was enjoying his wedding while the families of martyrs were mourning for their young ones. He always did this. His fake promises, his fake accusations on President Asif Ali Zardari. After the fall of his selected government and when Shahbaz Sharif was elected as the PM of this country and Chairman Bilawal Bhutto Zardari was elected as the Foreign Minister of this country, Mr Niazi created another drama, let’s call it ‘A Letter’. He was showing fake blank paper in front of media and making people believe that he is getting threats. Well really? Who will threat him? He is fake, liar, manipulator, corrupt, dictator and shameless person.

2023, The Year of Imran Niazi, it’s trending on twitter. Well, of course his selected workers and paid social media companies spread this trend. Just like his government his workers are selected too, like Shah Mahmood Qureshi a culprit, a liar, a fake person. Now Imran and his puppets are calling this government ‘Imported Government’. Well, you are imported. You are imported by some so called powers, you support violence, and you favor Taliban. Imran Niazi is the one who said there are no records of Prophet Esa in history. He is the person who does not know the history and he mocks PPP and badmouthed about women. Well, what can we expect from this loser?

I am not expecting anything positive from you, Mr Niazi. Keep on saying ‘Imported Hukoomat Na Manzoor’ as if we care? If people of Pakistan will vote for PPP as PTI is just a bunch of hypocrite freewheeling political Eskimos. I would like youngsters to follow Chairman Bilawal Bhutto Zardari and vote for him as we can see in past few months he did a lot for this country.