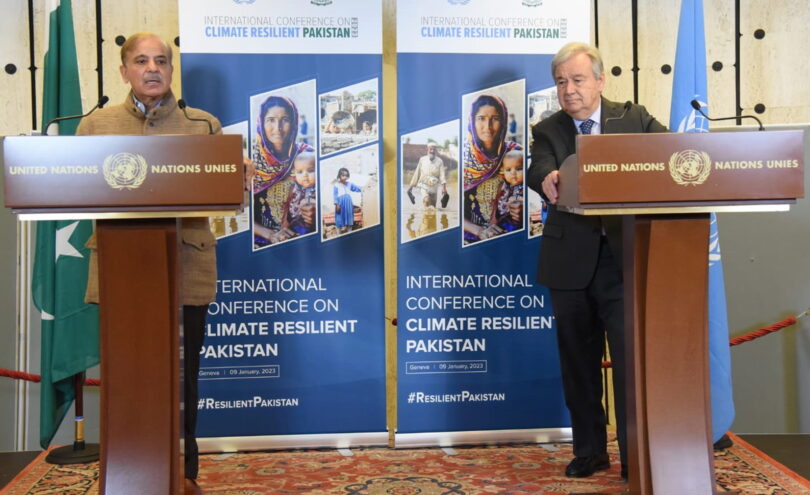 GENEVA (APP): Prime Minister Muhammad Shehbaz Sharif Monday said that considering ‘the gigantic task of resilient recovery, rehabilitation and reconstruction of 33 million flood affected people’, they were looking towards the global support to generate $8 billion to meet the impending challenges.
Addressing a joint press stakeout with United Nations Secretary General Antonio Guterres, the prime minister expressed the confidence that they would be able to generate close to about $8 billion dollars domestically and also looking towards the international community to contribute with an equal amount to support these measures. He said in today’s “Resilient Pakistan” conference, they, in consultations with the friendly countries and global partners, had worked out a comprehensive framework over Pakistan’s resilient recovery, rehabilitation and reconstruction efforts with a robust financial mechanism.
Elaborating the large-scale devastation caused by the floods, the prime minister said it had crippled Pakistan’s economy and they with meagre resources could not cope with such a gigantic challenge. The prime minister said that he had never witnessed such a destruction in his lifetime. About 33 million people were displaced, with 2 million houses were completely or impartially destroyed. The country’s economy suffered to the tune of $30 billon. The prime minister thanked the UN, UNDP, World Bank and other financial institutions and friendly countries for their support and assistance to the flood victims.
The prime minister informed that the government of Pakistan had already spent $400 million to provide support to about 2.7 million households whereas another amount of $575 million was spent in cash and kind which was contributed by the friends and countries across the globe. He said they were now going for reconstruction and rehabilitation of infrastructure and to put back 33 million people affected by floods on their feet which was an unprecedented contemporary task.
The prime minister said that Islamic Development Bank had pleaded $4.2 billion which was the largest contribution. He further assured that every penny contributed for the purpose would be spent in a transparent manner and they would be accounted for the amount as he had resolved for holding of a third party’s validation of these contributions. The prime minister also thanked the UNSG for inspiring millions of people across the globe to support Pakistan in these hard times, and offered gratitude to all friendly countries, Presidents of France and Turkiye, the financial institutions, partners and representatives for expressing solidarity with Pakistan during the conference.
To a query, the prime minister said that even before floods, Pakistan faced numerous economic issues. Due to serious tensions in the Eastern Europe, rising food inflation and sky rocketing of the oil prices worsened Pakistan’s imported inflation, impacting lives of the common man in the country, he added. He said when floods hit Pakistan, everything was destroyed. Huge chunks of the lands in different provinces were still inundated by the standing flood waters.
Reiterating his government’s resolve, the prime minister said that they were committed to comply with the terms and conditions of the International Monetary Fund (IMF) programme. He regretted that an agreement with the IMF was violated by the previous government. Speaking on the occasion, UN Secretary General Antonio Guterres stressed that it was a time for the international community to reciprocate with generosity shown by the people of Pakistan by very generously hosting millions of Afghan refugees for decades.
Recollecting his past experiences, he said Pakistan had witnessed difficult moments as it was badly affected by natural catastrophe like earthquakes and floods. He lauded the people of Pakistan for their generosity, their resilience against scourge of terrorism and supporting millions of Afghan refugees. Guterres further hoped that the global community would support Pakistan in rebuilding and reconstructing efforts as the country ‘has been a victim of man-made destruction’, adding that loss and damage fund would help support the developing countries like Pakistan. “We stand with Pakistan,” he said, urging the international community to invest in the resilience of the people of Pakistan and express the enormous generosity.
He said if they came close to generating $8 billion by the international community, ‘it would be a huge success’. The UNSG further called upon the global concrete action to save the common future of humanity, adding that they were on the road to climatic destruction and warned that the future would be on the verge of collapse if collective efforts were not made. He termed the soaring global temperatures as a real challenge due to rising emission of greenhouse gases. The secretary general expressing his dismay said that he was deeply frustrated over the world leaders’ response to the huge challenge.