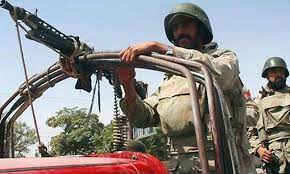 During the exchange of fire, four terrorists were killed, the ISPR added. The statement noted that a huge quantity of weapons and ammunition were also recovered in the IBO. It is pertinent to mention here that the country’s law and order situation has worsened over the past few months, with terrorist groups like the outlawed Tehreek-i-Taliban Pakistan executing attacks on law enforcement agencies (LEAs) across the country.

Earlier on December 31, a Pakistan Army soldier embraced martyrdom while four terrorists was killed during an intelligence-based operation (IBO) in general area of Jani Khel in Khyber-Pakhtunkhwa’s Bannu district. “During the exchange of fire, four terrorists were killed while a 25-year-old Sepoy Muhammad Waseem embraced martyrdom,” the ISPR said. Meanwhile, the security forces recovered a cache of arms and ammunition from the terrorists.