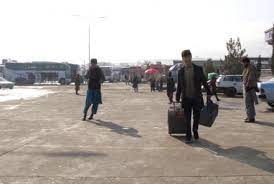 ANKARA (TOLOnews): Turkish media reported that at least 500 Afghan refugees have been deported by Ankara and that more than 5,000 others are in detention, who will also be deported soon.
TOLOnews reached out to some of the deportees, who complained about mistreatment of Turkish forces with them.
Bilal, a second year student of the faculty of political science, said that he went to Turkey seven months ago to find a job but he was reported.
“We didn’t have the right to talk. They would just beat us until they get tired,” Bilal said.
“They tightened our hands and feet. They wouldn’t feed us well. They would give two peices of bread with food for four people,” said Akram, an Afghan national deported from Turkey.
Anadolu Agency said that Ankara is due to deport nearly 20,000 refugees, of whom over 5,000 are Afghans.
“The government of Turkey had severed the conditions for Afghan refugees and no refugee can take asylum under the current situation,” said Maazullah Sultan Oghlo, an Afghan refugee in Turkey.
The Ministry of Refugees and Repatriation said that the Islamic Emirate has held talks with Turkish officials about the situation of Afghan refugees there.
“We are in contact to stop the process of deportation of Afghans,” said Abdul Mutalib Haqqani, a spokesman for the ministry.
“The international law for the refugees suggests host countries to treat well with refugees,” said Abdul Malik Afghan, a refugees rights activist.
Earlier, Turkish media reported that out of 124,000 undocumented refugees, 68,000 of them were Afghans in 2022.