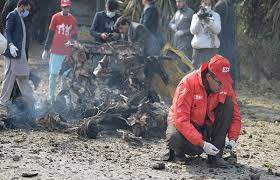 ISLAMABAD: An eight-member JIT has been formed to investigate the Islamabad suicide blast in which two people including a police official were martyred and 8 others sustained injuries.

A notification regarding formation of a Joint Investigation Team was released on Saturday.

The police authorities have formed an 8-member team which would launch a probe into the suicide blast that ripped through Islamabad’s Sector I-10 on Friday.

The DIG recommended the Islamabad chief commissioner to form the JIT which will be headed by the SSP of counter-terrorism department (CTD).

The other members of the JIT included: three DSPs, SP Industrial Area, SDPO Sabzi Mandi, and two officers of the sensitive agencies.

Yesterday, the CTD police registered an FIR of the Islamabad bomb blast. The case was registered on the complaint of an injured constable of the FIR Legal Squad.

The FIR was registered under sections of murder, attempt to murder, and terrorism.

According to the FIR, when police stopped a suspicious car at a checkpoint, the man sitting in the back seat exploded his suicide vest killing police official Adil Hussain and another person. (NNI)