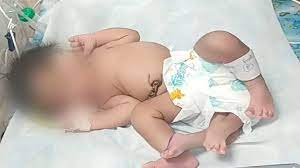 MADHYA PRADESH: A woman in India on Friday, gave birth to a child having four legs.

The medical staff at the hospital said the baby weighed 2.3 kg at birth.

Hospital Superintendent Dr RKS Dhakad said the baby girl had a physical ailment called Ischiopagus due to which two extra legs have also been attached to her body at birth, but both additional legs are inactive.

Doctors said that the medical examination of the girl will be done and if there would be no other disease in the child then her additional two legs will be removed through operation.