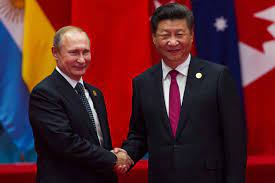 Recently, Russian President Vladimir Putin has hailed the Sino-Russia joint efforts against western provocations and informed his Chinese Counterpart Xi Jinping about his desire to ramp up military cooperation between the two neighbors. According to Putin, the Sino-Russia strategic partnership is a stabilizing factor amid growing geopolitical tensions between Moscow, Beijing, and western nations. The Russian leader was of the view that Beijing and Moscow share the same views on the causes, course, and logic of the ongoing transformation of the global geopolitical landscape, and this great convergence of interest provides the basis for greater cooperation and joint action for the two nations.

Desperate Putin has a longstanding quest for a broad base Sino-Russia partnership after Western allies slapped unprecedented economic and trade sanctions against the Kremlin in a response to Moscow’s blatant invasion of Ukraine. Although, Russia and China already completed two decades of their historic friendship treaty, Putin intends to forge a more comprehensive and wide-ranging relationship between the two neighbors that not only satisfies their economic and trade requirements but also set a coordinated and unanimous response to western allies who pose a common threat to both countries.

Interestingly, the Chinese have a bit different version regarding Sino-Russia cooperation and strategic partnership who advocate close cooperative relations between Beijing and Moscow to implement high-level strategic partnerships between the two countries to safeguard their common interests and promote a more just and rational International order that ensure global peace and protects the rights of vulnerable nations in the world. However, Xi and his aides need a conflict-free decade to fully realized China’s economic and military growth besides an active pursuit of peaceful economic goals across multiple regions in the world.

China and Russia are common victims of the US trade war, technological ban, and western sanctions, while enhanced bilateral trade and defense ties are in the best interest of both countries. Recently, both nations have offered a collective resistance to western incursion in the Indo-Pacific region and demonstrated coordinated response on the Taiwan issue.

Previously, China has presented the idea of a Sino-Russia new world order as an alternative to the existing US-led unipolar world. However, Chinese leaders are more careful in their approach, besides supporting Moscow’s so-called special operation in Ukraine, Beijing remained at an arm length from Putin to protect its economic and trade interests in the west.

The ongoing US-Russia rivalry and Washington’s strategic competition with Beijing have paved the path for a bipolar or multi-polar world in the future. As a unipolar world largely remained chaotic and unstable while multiple centers of power are likely to create a balance in the geo-strategic and political affairs of the world. Although weak nations and people across the globe had always suffered coercion from the major powers, yet vulnerable communities find some space in a divided world.