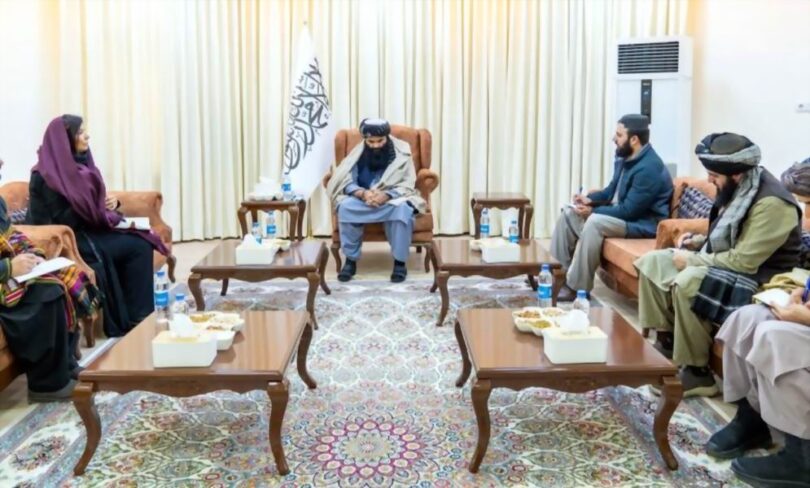 KABUL (Khaama Press): Khalifa Sirajuddin Haqqani, the Acting Interior Minister of the Islamic Emirate met with Raffaella Lodice, Head of the European Union Delegation to Afghanistan on Wednesday.
The Acting Interior Minister praised the active role the European Union mission is playing in Afghanistan during these difficult times, particularly the organization’s humanitarian aid and support programs saving the lives of thousands of vulnerable Afghan families across the country.
Mr. Haqqani wholeheartedly appreciated the EU for standing with the people of Afghanistan amid these challenging economic times.
For her part, Raffaella Lodice thanked the Acting Interior Minister for taking significant actions to ensure the security of the international humanitarian aid workers to continue working for the people of Afghanistan across fields.
The meeting comes as the United Nations delegation have already arrived in Kabul for talks with the Taliban authorities on human rights, girls’ education, women’s work issue, and more.
The UN delegation includes Deputy Secretary-General Amina Mohammed and Sima Bahous, executive secretary of UN Women, spokesman Farhan Haq said, according to official sources.
Taliban’s latest gender-based restrictions barring girls and women from attending university and working with non-governmental aid organizations prompted worldwide condemnations, calling for Afghanistan’s de facto regime to reverse the decision and respect basic human rights.
UN secretary general Antonio Guterres says nothing can justify keeping girls out of the classroom, and it is the responsibility of the Taliban authorities to provide equal chances for boys and girls to get an education in a peaceful environment.
The Taliban-run administration of Kabul is currently faced with critical challenges including poverty, hunger, security, and unemployment – too big for them to find comprehensive solutions.