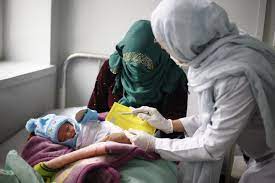 KABUL (Agencies): Afghanistan has vaccinated 5.36 million Afghan children 9–59 months against measles while 6.1 million children 0-59 months received oral polio vaccine in a nationwide vaccination campaign held from 26 November to 12 December 2022.
Based on the data from Afghanistan’s Ministry of Public Health Expanded Programme on Immunization, the campaign covered 329 districts in all the 34 provinces of Afghanistan. There were 4341 vaccination teams comprising 4 team members on each team.
“It warms my heart that we were able to protect Afghan children from measles and polio as we enter the harsh winter season in the country,” says Dr Luo Dapeng, WHO Representative in Afghanistan. “This is the first nationwide integrated measles and polio campaign in Afghanistan since the transition in August 2021 and I thank all the health workers, partners and donors who made this possible.”
In 2022, many measles outbreaks were reported in Afghanistan. As of November 2022, Afghanistan has confirmed 5484 measles cases with approximately 300 deaths attributed to measles infection. Most of the measles cases are among children under-5 years old.
Prior to the nationwide campaign, a series of subnational measles immunization campaigns were conducted in 141 districts covering approximately 3 million children.
Measles is a dangerous disease, with complications that can include severe diarrhoea and dehydration, pneumonia, ear and eye complications, encephalitis or swelling of the brain, permanent disability and death. There is no specific treatment for measles.
The only reliable protection from measles is vaccination.
“While measles is highly contagious, it is also a preventable disease. We must not lose the decades of progress we have achieved in immunizing and protecting Afghan children. The measles vaccine is safe and has been in use for more than 50 years. The benefits of vaccination are clear, as evidence shows measles vaccination saved over 23 million lives worldwide over the past 20 year period,” added Dr Dapeng.
The measles campaign in Afghanistan was supported by WHO and UNICEF in terms of vaccine procurement and delivery, development of immunization guidelines and communication materials, and building the capacity of health workers to manage and implement the campaign and ensure that all eligible children are protected through safe and effective vaccines for measles and polio. Financial support for the campaign was provided by Gavi – the Vaccine Alliance.