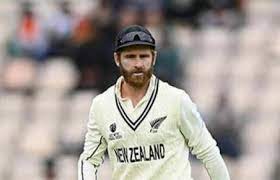 AUCKLAND (AFP): Kane Williamson stepped down as New Zealand Test captain on Thursday after more than six years in charge but will remain skipper of the ODI and T20 teams.

Cricket New Zealand said that the 32-year-old will be replaced as Test captain by veteran fast bowler Tim Southee.

“Captaining the Black Caps in Test cricket has been an incredibly special honour,” said the 32-year-old Williamson who has led New Zealand since 2016.

“Captaincy comes with an increased workload on and off the field and at this stage of my career, I feel the time is right for this decision.”

He said that following talks with New Zealand Cricket, he will remain captain of the white-ball team with two World Cups looming in the next two years.

He will also continue to play all three formats.

Williamson signs off as skipper having led New Zealand to 22 wins in 40 Test matches.

Eleven of his 24 Test hundreds came when he was skipper — a record for a New Zealand captain.

Southee, 34, will lead the team on their forthcoming tour of Pakistan with Tests in Karachi, starting on December 26, then in Multan beginning January 3.

Tom Latham has been confirmed as Southee’s vice-captain having previously leading the side in Williamson’s absence.

Southee has played 346 internationals and has skippered New Zealand’s Twenty20 team on 22 occasions. He is New Zealand’s 31st Test captain.

“It’s been a surreal few days and it’s just a massive honour to be appointed as Test captain,” said Southee.

“I love Test cricket, it’s the ultimate challenge and I’m really excited by the opportunity to lead the team in this format.”