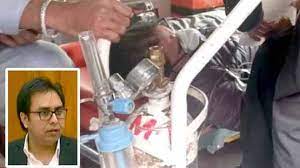 ISLAMABAD: A sessions court in the federal capital on Friday deferred indictment of PTI leader Shahbaz Gill in the sedition case due to his illness .

Additional District and Sessions Judge Tahir Abbas Sipra adjourned the indictment till Jan 20 after the PTI leader reached the court by ambulance with oxygen support.

During the hearing, a lawyer for Mr Gill told the judge that his client was present outside court in an ambulance and he could not be brought inside for being on the oxygen support.

Meanwhile, the Islamabad court issued bailable arrest warrant for another suspect, Ammad Yousaf, in the case for repeatedly avoiding the hearings. Judge Sipra remarked that Mr Gill had reached court by ambulance but Mr Yousaf could not come from Karachi. The latter’s lawyer informed court that his client was suffering from malaria and sought exemption from appearance in the case. The judge remarked it seemed that the case was being intentionally delayed.

Last month, the PTI stalwart was admitted to the Services Hospital in Lahore with difficulty in breathing. He was arrested in August last on the charges of sedition and inciting the public against the state institutions. He was later released on bail dunyanews.tv/en/Pakistan/667751-IHC-grants-Shahbaz-Gill-post-arrest-bail-in-sedition-caseby an Islamabad court.