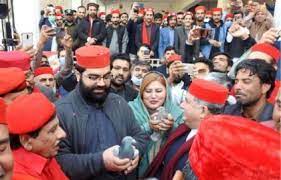 Addressing the function, the provincial president of ANP and Chief Executive Officer (CEO), Bacha Khan Trust, Aimal Wali Khan said that the establishment of Bacha Khan Trust Complex at Uthmanzai is a matter of pride as Bacha Khan started his movement from the area 100 years back.

He said that the day is historic and a source of pride for every associate of that movement. He said that the construction of Bacha Khan Markaz is also completed in Buner, saying in future it would be established in every district of the province. Aimal Wali Khan said that foreign orchestrated movement has first targeted the educational institutions to push Pakhtuns to the darkness of illiteracy.

He said they want the extension of the network of Bacha Khan Schools to the whole Pakhtun region, so our future generation does not remain behind anyone in the race of development. Bacha Khan Trust Complex is spread over an area of 160 kanal, which will house a Bacha Khan, hostel and Bacha Khan Markaz. Construction work on the complex will begin soon. Land for the construction of the complex was donated by president ANP Tehsil Charsadda, Taimur Khattak.