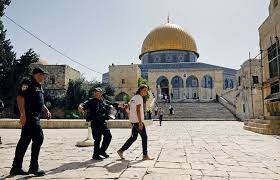 PARIS (AFP): The Al-Aqsa mosque compound, or the Temple Mount for Jews, is a highly sensitive site sacred to both Islam and Judaism in the Old City of Israeli-annexed east Jerusalem.

On Tuesday, Israel’s extreme-right firebrand Itamar Ben-Gvir visited the compound for the first time since becoming national security minister last month, enraging Palestinians who see the move as a provocation.

The third-holiest site in Islam and the holiest site for Jews, it is a powder keg where the slightest incidents can degenerate into sometimes deadly clashes.

The 14-hectare (35-acre) rectangular esplanade at the southeast corner of the Old City was seized by Israel during the 1967 Six-Day War, along with the rest of east Jerusalem which was later annexed in a move never recognised internationally.

Israel considers all of Jerusalem as its indivisible capital, but the Palestinians want the eastern sector, which includes the Old City and its sacred sites, as the capital of their future state.

Known to Muslims as Al-Haram al-Sharif (the Noble Sanctuary), the compound houses the Al-Aqsa mosque and the Dome of the Rock, a famous golden shrine.

Believed to be where the Prophet Mohammed ascended to heaven on a winged horse, it is the third-holiest site in Islam after Mecca’s Grand Mosque and the Prophet’s Mosque in Medina, both in Saudi Arabia.

The compound in its current form was built in the seventh century by Islam’s second caliph, Omar, on the site of the Second Jewish Temple that was destroyed by the Romans around 70 AD.

The area is revered by Jews, who come from across the world to pray at the Western Wall, a remnant of the retaining wall of the Second Temple that is situated below the esplanade.

In Hebrew, the whole area is referred to as Har HaBayit — the Temple Mount.

Under a status-quo agreement, Al-Aqsa mosque is administered by Jordan in coordination with the Palestinians but access to the site is controlled by Israeli security forces.

The decades-old rules allow Muslims to enter the esplanade at all times of the day and night, but non-Muslims can only do so at certain times and without praying.

But over the past few years, Israeli police have repeatedly closed access to the site during times of tension and the number of Jews visiting the compound has increased.

Some ultra-nationalist Jews, who want to begin building a Third Temple at the site, have been caught praying at the esplanade, causing tensions with Muslim worshippers.

The site is a lightning rod in the conflict between Israel and the Palestinians.

In 1996, an Israeli decision to open a new entrance to the west of the esplanade sparked clashes that left more than 80 people dead in three days.

A controversial visit to the esplanade in September 2000 by then right-wing opposition leader Ariel Sharon was one of the main triggers for the second Palestinian intifada, an uprising that lasted from 2000 to 2005.

In 2017, the compound was temporarily closed after three Arab Israelis opened fire at Israeli police near the site, killing two of them, before fleeing into the compound, where they were shot dead by security forces.

Two years later, clashes between police and worshippers at the compound left dozens of Palestinians wounded during important Jewish and Muslim commemorations.

In 2021, during the Muslim holy month of Ramadan, the esplanade was again the scene of clashes between Israeli police and Muslim worshippers, events that led up to an 11-day war between the Palestinian militant group Hamas and Israel.

In the spring of 2022, the site saw renewed clashes that left hundreds of Palestinians wounded.