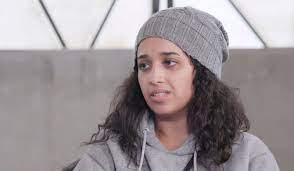 ROJ CAMP, Syria (AP): A woman who ran away from home in Alabama at the age of 20, joined the Daesh group and had a child with one of its fighters says she still hopes to return to the United States, serve prison time if necessary, and advocate against the extremists.

In a rare interview from the Roj detention camp in Syria where she is being held by US-allied Kurdish forces, Hoda Muthana said she was brainwashed by online traffickers into joining the group in 2014 and regrets everything except her young son, now of pre-school age.

“If I need to sit in prison, and do my time, I will do it. … I won’t fight against it,” the 28-year-old told US-based outlet The News Movement. “I’m hoping my government looks at me as someone young at the time and naive.”

It’s a line she’s repeated in various media interviews since fleeing from one of the extremist group’s last enclaves in Syria in early 2019.

But four years earlier, at the height of the extremists’ power, she had voiced enthusiastic support for them on social media and in an interview with BuzzFeed News. Daesh then ruled a self-declared Islamic caliphate stretching across roughly a third of both Syria and Iraq. In posts sent from her Twitter account in 2015 she called on Americans to join the group and carry out attacks in the US, suggesting drive-by shootings or vehicle rammings targeting gatherings for national holidays.

In her interview with TNM, Muthana now says her phone was taken from her and that the tweets were sent by Daesh supporters.

Muthana was born in New Jersey to Yemeni immigrants and once had a US passport. She was raised in a conservative Muslim household in Hoover, Alabama, just outside Birmingham. In 2014, she told her family she was going on a school trip but flew to Turkiye and crossed into Syria instead, funding the travel with tuition checks that she had secretly cashed.

The Obama administration canceled her citizenship in 2016, saying her father was an accredited Yemeni diplomat at the time she was born — a rare revocation of birthright citizenship. Her lawyers have disputed that move, arguing that the father’s diplomatic accreditation ended before she was born.

The Trump administration maintained that she was not a citizen and barred her from returning, even as it pressed European allies to repatriate their own detained nationals to reduce pressure on the detention camps.

US courts have sided with the government on the question of Muthana’s citizenship, and last January the Supreme Court declined to consider her lawsuit seeking re-entry.

That has left her and her son languishing in a detention camp in northern Syria housing thousands of widows of Daesh fighters and their children.

Some 65,600 suspected Daesh members and their families — both Syrians and foreign citizens — are held in camps and prisons in northeastern Syria run by US-allied Kurdish groups, according to a Human Rights Watch report released last month.

Women accused of affiliation with Daesh and their minor children are largely housed in the Al-Hol and Roj camps, under what the rights group described as “life threatening conditions.” The camp inmates include more than 37,400 foreigners, among them Europeans and North Americans.

Human Rights Watch and other monitors have cited dire living conditions in the camps, including inadequate food, water and medical care, as well as the physical and sexual abuse of inmates by guards and fellow detainees.

Kurdish-led authorities and activists have blamed Daesh sleeper cells for surging violence within the facilities, including the beheading of two Egyptian girls, aged 11 and 13, in Al-Hol camp in November. Turkish airstrikes targeting the Kurdish groups launched that month also hit close to Al-Hol. Camp officials alleged that the Turkish strikes were targeting security forces guarding the camp.

“None of the foreigners have been brought before a judicial authority … to determine the necessity and legality of their detention, making their captivity arbitrary and unlawful,” Human Rights Watch wrote. “Detention based solely on family ties amounts to collective punishment, a war crime.”

Calls to repatriate the detainees were largely ignored in the immediate aftermath of Daesh’ bloody reign, which was marked by massacres, beheadings and other atrocities, many of which were broadcast to the world in graphic films circulated on social media.

But with the passage of time, the pace of repatriations has started to pick up. Human Rights Watch said some 3,100 foreigners — mostly women and children — have been sent home over the past year. Most were Iraqis, who comprise the majority of detainees, but citizens were also repatriated to Australia, Canada, France, Germany, the Netherlands, Russia and the United Kingdom.

The US has repatriated a total of 39 American nationals. It’s unclear how many other Americans remain in the camps.

These days, Muthana portrays herself as a victim of the Daesh.

Speaking with TNM, she describes how, after arriving in Syria in 2014, she was detained in a guest house reserved for unmarried women and children. “I’ve never seen that kind of filthiness in my life, like there was 100 women and twice as much kids, running around, too much noise, filthy beds,” she said.

The only way to escape was to marry a fighter. She eventually married and remarried three times. Her first two husbands, including the father of her son, were killed in battle. She reportedly divorced her third husband.

The extremist group, which is also known as Daesh, no longer controls any territory in Syria or Iraq but continues to carry out sporadic attacks and has supporters in the camps themselves. Muthana says she still has to be careful about what she says because of fear of reprisal.

“Even here, right now, I can’t fully say everything I want to say. But once I do leave, I will. I will be an advocate against this,” she said. “I wish I can help the victims of Daesh in the West understand that someone like me is not part of it, that I as well am a victim of Daesh.”

Hassan Shibly, an attorney who has assisted Muthana’s family, said it is “absolutely clear that she was brainwashed and taken advantage of.”

He said her family wishes she could come back, pay her debt to society and then help others from “falling into the dark path that she was led down.”

“She was absolutely misguided, and no one is denying that. But again, she was a teenager who was the victim of a very sophisticated recruitment operation that focuses on taking advantage of the young, the vulnerable, the disenfranchised,” he said.