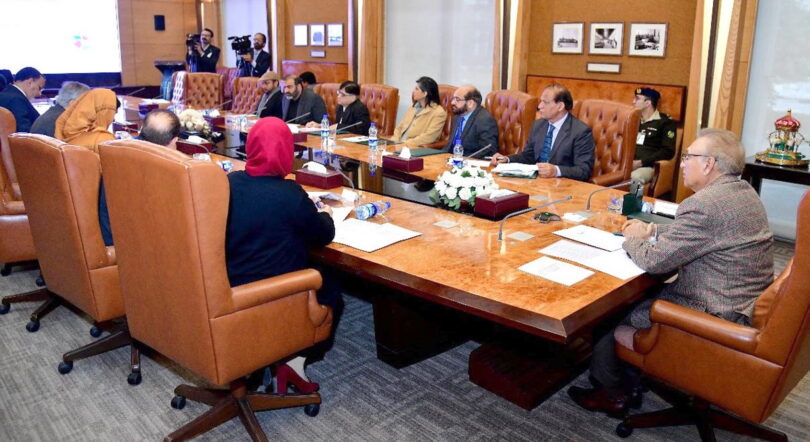 F.P. Report
ISLAMABAD: President Dr Arif Alvi on Tuesday stressed the need for integrating the initiatives taken by various public departments to address the challenges pertaining to mental health. Chairing a follow-up meeting on mental health, he said the initiatives on mental health taken by the Prime Minister’s Office, Ministry of Planning and Development and Special Initiatives, and the President’s House could be integrated by optimizing processes and combining them to develop an effective Artificial Intelligence based helpline.
The meeting that was held at Aiwan-e-Sadr on Tuesday was attended by the members of the National Commission for Human Rights, the World Health Organization, the Pakistan Psychological Association, the Pakistan Psychiatric Society, officials of the Taskeen Health Initiative, and members of the academia. The president said the helpline could reach out to the maximum population around the country to provide them counselling and advice on mental health issues faced by them.
He said that some excellent work had been done led by the Prime Minister’s Office, the Ministry of Planning and Development as well as the President’s House, which showed the focus and importance being accorded to providing mental health services to the target population to reduce stress levels in society. This, he said, was paramount for a healthy society and for the progress and development of the country.
He said the financial needs may be determined by the relevant stakeholders keeping in view the technical requirement, hiring of expertise and setting up of required essential physical infrastructure. The president said that available psychiatrists and psychologists of the Pakistani diaspora in the United Kingdom and in other countries should be integrated into the system to provide quality, authentic and professional advice.
He noted that there were around 2,000 psychiatrists of Pakistani origin in the UK, who could be integrated into the system. He said that mental health service provider systems should be integrated with the existing resources available in health institutes, both public and private, and should have a futuristic outlook to allow for expansion, modification, alteration and improvements in the system to fully exploit opportunities which come to light during its operation in future. The president said the artificial intelligence-based system should have the capabilities to cater to the entire target population and the ability to filter out the number of patients, which need expert advice according to the available psychiatrists and psychological resources.
Dr Alvi said that suicide was now distinguished from crimes in Pakistan and considered a mental health issue, which has opened up new avenues to provide mental health advice to prevent suicide. He said that a comprehensive media campaign would be needed after testing and making the mental health providing system fully functional to ensure its credibility and advocacy. He said that the system should have an integrated mechanism to record the calls to ensure consistency, accuracy and effectiveness of the advice rendered by the experts with the permission of the help seekers regarding respect for the patient privacy.