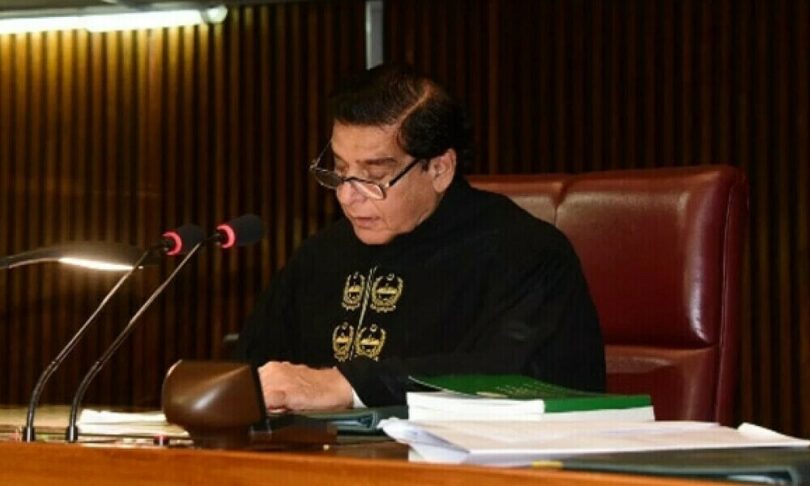 ISLAMABAD (INP): National Assembly (NA) Speaker Raja Pervez Ashraf on Tuesday accepted resignations of 43 more PTI lawmakers a day after they announced the withdrawal of their resignations in a bid to bar opposition leader Raja Riaz, a dissident PTI leader, from negotiating with the government on caretaker setup in case general elections are announced.
The move has taken the tally of PTI resignations approved by the speaker to 124 as he approved 70 earlier this week and 11 in August last. The resignations were submitted by the PTI MNAs in April last in protest against the ouster of of Imran Khan as prime minister through no-confidence vote.
The speaker has accepted the resignations of Riaz Fatyana, Sardar Tariq Hussain, Mohammad Yaqub Sheikh, Murtaza Iqbal, Sardar Mohammad Khan Leghari, Zile Humman, Rukhsana Naveed, Ghazala Saifi, Nousheen Hamid, Sobia Kamal Khan and others.
On Monday, 45 PTI MNAs tried to meet the speaker to withdraw their resignations but he was unavailable. Later, they staged protest outside the parliament and a sit-in outside the official residence of the speaker in the federal capital.
The swift approval of the resignations came after Imran Khan-led party took U-turn on resignations and announced its return to the assembly and putting Prime Minister Shehbaz Sharif to test through no-confidence vote.The general elections have become talk of the town since the dissolution of the Punjab and Khyber Pakhtunkhwa assemblies. However, the government has been reiterating that the elections would be held on time. Mr Khan had repeatedly claimed that the general election could be held in March or April this year.
He had been calling for early elections in the country since his ouster through a no-confidence vote in April last year. It learnt that resignations of two members had not been accepted on Tuesday due to their leave request. The secretariat stated that the resigned members were called several times for verification.
While, the Assembly Secretariat sends the accepted resignations to ECP; to de-seat the MNAs. Now ECP is due to announce the de-notification of the PTI lawmakers. Once the members are de-notified, none of the resigned PTI MNAs will remain part of the national assembly. The move came after the threats from the PTI to return to parliament only to foil a vote of confidence, which the party hoped President Dr Arif Alvi would seek from Prime Minister Shehbaz Sharif.
Meanwhile, the PTI leader Fawad Chaudhry cried foul after reports regarding National Assembly Speaker Raja Pervaiz Ashraf accepting the resignations of more PTI lawmakers emerged on media. Reacting to the development, Chaudhry tweeted that the purpose of PTI members going back to the assembly was to oust Raja Riaz from the position of the opposition leader.
Otherwise, we have no reason to return to the National Assembly, he tweeted, adding: “Right now, Shehbaz Sharif and his government have lost the support of 172 lawmakers.” He also pointed out that 40 per cent of seats in the NA were now empty. “The only solution to this crisis is elections.” Today’s development comes a day after 45 PTI MNAs sent their handwritten withdrawals to the speaker via email and demanded the nomination of a new opposition leader from among them.