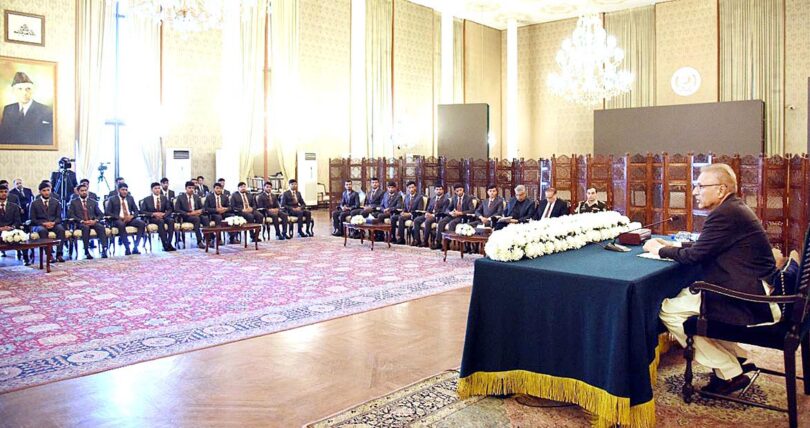 ISLAMABAD (APP): President Dr Arif Alvi on Thursday called for enhancing engagement with the people of Balochistan at the grassroots level and prioritise investment in human resource development for prosperity of the people.
The president, talking to the students of Cadet College, Kohlu, at Aiwan-e-Sadr who are on educational visit to the Capital, called for fully developing and benefiting from the marine and land-based natural resources of the province to deliver economic growth.
He said that the national and provincial leadership had a responsibility to develop strong political relationships with the people of the province through increased interactions and confidence building. He especially emphasized engaging the youth of the province to motivate and enable them to play their role in provincial and national development.
President Alvi said that Balochistan was a mineral-rich province and that Reko Diq and other such projects in future could make Balochistan prosper in a short period of time. He said that Balochistan’s natural resources could be fully developed by benchmarking best global practices, discouraging corruption and corrupt practices, and utilizing human resources optimally with definite goals, KPIs and time-lines. He termed eliminating nepotism, uprooting corruption in all of its forms, promoting merit, and transparency as essential for building a strong and prosperous nation.
The president said that political stability, curbing corruption, strengthening institutional framework and focusing on skill development could lead the province towards rapid progress and development. He regretted that due to various reasons Pakistan could not achieve its rightful place in the comity of nations.
Replying to a question, the president said that political stability and continuation of policies were keys for achieving financial and socio-economic stability, and promoting trade and investment in the country.
He said that all stakeholders should set aside their enmity, ego and extreme behaviours, keep the greater national interest supreme and develop consensus through democratic means for holding free, fair and impartial elections to let people choose their representatives.
Answering a question, the president said the students should continue the pursuit of knowledge throughout their lives, hone their skills continuously, and set the right priorities for themselves while keeping their moral, ethical and family values intact. He advised them to maintain humane behaviour and observe humility in their conduct as they would not only advance in their careers but would also get happiness and satisfaction in life.
The president appreciated the Cadet Colleges of Pakistan for producing quality graduates, who after graduating, were serving the Pakistan Armed Forces and in other fields as physicians, engineers and businessmen. The Cadet College, Kohlu was announced in 2006 and the first batch of Cadets was inducted in 2016 that passed out in 2022. At present total strength of cadets is 298 with 34 faculty members.