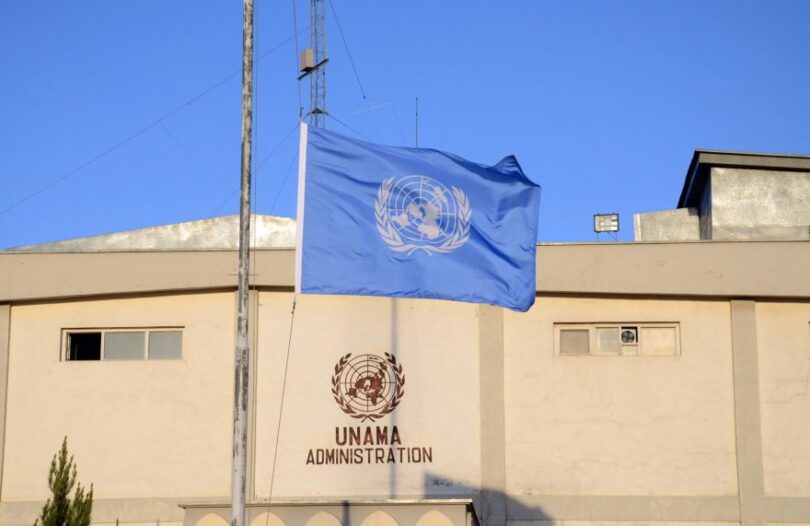 KABUL (Khaama Press): The United Nations Assistance Mission in Afghanistan (UNAMA) says that announcements by non-UN entities about cash packages are misleading and unhelpful.
Following the announcement of “Da Afghanistan Bank” the country’s central bank, UNAMA clarified in a series of tweets that cash package shipped to Afghanistan is deposited in UN accounts in a private bank.
UNAMA has also reiterated that the amount of cash dispatched to Afghanistan directly depends on the humanitarian aid programs of this institution.
This comes as Afghanistan’s central bank on Saturday announced that a $40 million fresh aid package had been shipped to the country. This cash aid arrived in Kabul after weeks of silence and rumors that the international community had intentionally ended the aid package in response to the latest restrictions by the Taliban authorities barring women from university education and employability at government and non-government aid organizations.
According to the central bank, so far, 22 $40 million and 30 $32 million aid packages have been dispatched to Afghanistan. After the return of the Taliban to Power in August 2021, the international community’s cash aid packages reach a total of $1.833 billion.
The United Nations transports cash into Afghanistan for use by UN agencies. The UN uses the funds to conduct its work in Afghanistan, primarily in providing critical humanitarian assistance to millions of Afghans requiring support. A central reason the UN brings cash into Afghanistan is due to the disruption to international banking transfers and liquidity issues since August 2021.
All cash brought into Afghanistan is placed in designated UN accounts in a private bank for use by the United Nations.
All these funds are then distributed directly to the United Nations entities, as well as to a small number of approved and vetted humanitarian partners in Afghanistan.
None of the cash brought into Afghanistan is deposited in the Central Bank of Afghanistan nor provided to the Taliban de facto authorities by the UN.
The controversy comes following the Central Bank’s claim that it had deposited the transferred money into a private bank, rejected by the UNAMA Afghanistan – stating that the international community’s cash aid is directly deposited in UN accounts, not giving the Taliban de facto authorities.