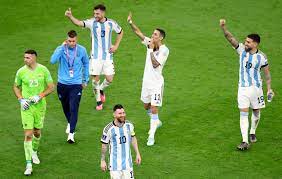 DOHA (Reuters): Argentina made a statement in their 3-0 World Cup semi-final win over Croatia and will head into Sunday’s showpiece with two players back from suspension and Angel Di Maria fit and ready to face France.

Defenders Gonzalo Montiel and Marcos Acuna missed the semi-final as they were suspended after accumulating two yellow cards.
Left back Acuna was the biggest loss for Argentina in that game as he has been a critical part of coach Lionel Scaloni’s set-up during the tournament, playing in all of their previous five games and starting four times.

In their quarter-final against the Netherlands, he was arguably one of Argentina’s best players, winning nine of his 13 duels, completing 100% of his dribbles and earning the penalty from which Lionel Messi scored their second goal.

He could be critical if Argentina are to control that side of the pitch, where France have Ousmane Dembele in great form.
Montiel has been a squad player but he was also critical in their win over the Dutch, converting in the penalty shootout, which Argentina won 4-3.

The third piece of the puzzle that could be key to Argentina’s success against France is midfielder Di Maria, who was left on the bench for the whole of the semi-final against Croatia as Argentina cruised home having taken a first-half lead.

Di Maria, who has been recovering from a thigh injury suffered against Poland in the group stage, has played only nine minutes in Argentina’s last three matches. Yet he is expected to be fit and ready to go in Sunday’s final.
The 34-year-old was Argentina’s hero in last year’s Copa America final against bitter rivals Brazil, scoring the goal that earned them their first major title in 28 years.

He and Messi are the only two Argentina players who were also in the squad that lost the 2014 World Cup final against Germany in Brazil.
Di Maria, who missed that match more than eight years ago due to injury, will get a second chance to get his hands on the most sought-after prize in world football and should be fresh for the final as Argentina go in search of a third World Cup title.