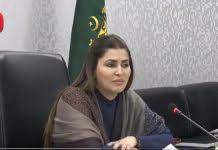 ISLAMABAD: A total of 1.8 million children have been enrolled under the Benazir Taleemi Wazaif Programme with disbursement of Rs. 15 billion among the beneficiaries from May till October 2022.

The Programme is being executed by the Benazir Income Support Programme (BISP).

The Programme was launched, recognizing that many children in BISP beneficiary households were not attending school, in the year 2012 through provision of additional cash per quarter to BISP beneficiary families for pursuing primary education.
Since July 2021, the scope of the Programme has been expanded from primary to secondary and higher secondary level, and is currently operational all over the country.

The number of beneficiaries of the Kafalat Programme, which is an Unconditional Cash Transfer (UCT) initiative, have been increased from 7.2 million to 8.5 million during this period (May-October). Currently, the number of enrolled/registered beneficiaries of the Kafalat programme is around 8.58 million. However, the present government has set a target to enhance this number up to 9 million by June 2023.

The BISP Board has recently approved a policy to include transgenders under the Programme for which they are required to obtain a CNIC form NADRA clearly mentioning their gender as ‘transgender’.

About the Targeted Petroleum Subsidy Programme, the source told APP that an amount of approximately Rs 17.35 billion had been distributed among around 8.67 million beneficiaries under the initiative from May-October, 2022.

The initiative was launched in order to protect the poor and the vulnerable families from the effects of rising fuel prices by providing an additional cash subsidy of Rs 2,000 to existing regular BISP beneficiaries as well as additional beneficiaries using National Socio-Economic Registry (NSER) database.

About the Flood Relief Programme, the official source disclosed that from August till October 2022, an amount of approximately Rs 69 billion had been distributed among around 2.76 million families affected by the catastrophic floods this year, under the Prime Minister’s Flood Relief Cash Assistance Programme. The immediate cash relief of Rs 25,000 per family was disbursed among the affected families due to the recent floods across the country through BISP.

About the CCT Benazir Nashonuma Programme, the official source highlighted, “A total of Rs 162,964,000 has been distributed among the enrolled beneficiaries from May to October, 2022”. The Programme aims to address stunting among pregnant and lactating women (PLW), and their children under the age of 2 years through the provision of additional cash of Rs 2,000/- per quarter per PLW for boy child and Rs 2,500/- per quarter for girl child of BISP beneficiary families.

About the current status of the Benazir Undergraduate Scholarship Project (BUSP), the source revealed that the process of enrollment had been completed by enrolling 10,000 students for the scholarship. The entire budget of Rs 7.346 billion, earmarked for FY 2021-22, was released in May 2022. In September 2022, a further amount of Rs 2.24 billion was released out of the total budget of Rs 9.27 billion earmarked for CFY. Higher Education Commission (HEC) is in the process of disbursing the amount to all 132 participant universities across Pakistan. (APP)