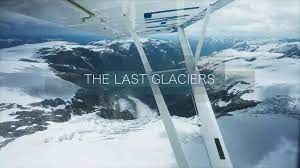 NORWAY: Chunks of ice float in milky blue waters. Clouds drift and hide imposing mountaintops. The closer you descend to the surface, the more the water roars — and the louder the “CRACK” of ice, as pieces fall from the arm of Europe’s largest glacier.

The landscape is vast, elemental, and seemingly far beyond the human scale. The whole world, it seems, lies sprawled out before you. Against this outsized backdrop, the plane carrying the man who chases glaciers seems almost like a toy.

“No one’s there,” the man marvels. “The air is virtually empty.”

This is Garrett Fisher’s playground — and, you quickly realize, his life’s work.

He is traveling the world, watching it from far above, sitting in the seat of his tiny blue-white “Super Cub” aircraft. It’s here that he combines his two longtime passions — photography and flight — in a quest to document every remaining glacier on the face of the Earth.

On one level, the 41-year-old Fisher does it for a simple reason: “Because I love them.”

But he does it, too, because of weightier things. Because the climate clock is ticking, and the planet’s glaciers are melting.

Because Fisher is convinced documenting, archiving, and remembering all of this serves a purpose.

Because, in the end, nothing lasts forever — not even ancient glaciers.

Glaciers aren’t static. In a world that’s getting warmer, they’re getting smaller

“In 100 or 200 years, most of them will be gone or severely curtailed,” Fisher says. “It is the front line of climate change … the first indication is that they’re losing something.”

According to data from the European Environmental Agency, the Alps, for example, have lost about half their volume since 1900, with the most evident acceleration of melting happening since the 1980s. And the glacier retreat is expected to continue in the future.

Estimates from the EEA say that by 2100, the volume of European glaciers will continue to decline by between 22% and 84% – and that’s under a moderate scenario. More aggressive modeling suggests up to 89% could be lost.

“We have a record of observations of small glaciers in settled areas, particularly in the Alps and Norway and New Zealand,” says Roderik van de Wal, a glacier expert at Utrecht University in the Netherlands. That record, he says, shows glaciers retreating even more. “That’s a consequence of climate change.”

The slow demise of glaciers, of course, is a problem that transcends aesthetics or even the glaciers themselves. A rise in sea level of about 15 centimeters around the globe during the past century is due in large part to glacier melt.

Which sets that ticking clock running. And which has gotten Garrett Fisher moving.

For Fisher, it started – as so many things do for so many people – in childhood.

He grew up in a quiet rural community in upstate New York, the child of local business owners and grandson of a scrappy pilot who introduced him early to aviation. He lived next door to a private airport.

Fisher was only a toddler when his grandfather Gordon plopped him in the back of his plane. The boy wasn’t happy about it, but the dismay quickly turned to delight. By age 4, he was hooked on the flight.

Fisher recalls endless hours spent gazing out of his bedroom window, waiting for the barn door to his grandfather’s airplane hangar to open. The older man would tell him: “Whatever you set your mind to, you can do.”

Then, as a young man, he took up photography. Two of the three parts of his obsession were in place.

Sometime in the late 1990s, a friend told Fisher that the world’s glaciers were disappearing. It has haunted him ever since, so much so that it added the third piece of the triangle: the urgency to beat the clock.

He saw them disappearing, and he wanted to make sure these pieces of the world – pieces he saw as indescribably beautiful – were preserved, if only in pixels.

“When I’m high up, I see these forbidden views,” he says. “They’re views you can’t have on the ground, that doesn’t really exist for anyone else.”

He aims his efforts squarely at posterity. Any documentation he makes of the glaciers before their demise, he believes, could be invaluable to future generations. So, he has launched a glacier initiative, a non-profit to support and showcase his work, and he plans to open his archive to the public for research – some now, the rest when he is gone.

Fisher is hardly the first to feel the archival instinct when it comes to glaciers. Since the invention of photography in the early decades of the 19th century, glaciers have been documented with fascination by everyone from passing travelers to scientists.

Norwegian photographer Knud Knudsen, one of his nation’s founding art photographers, delved into the landscape with an obsession similar to Fisher’s. He traveled around Norway’s west coast, photographing nature: fjords, mountains, waterfalls … and glaciers.

But in an era where everything related to photography was heavy, unwieldy, and slow, Knudsen was earthbound, traveling on wagons and boats. On one trip, he brought about 175 pounds in gear – including glass negatives. Unlike Fisher, he could not soar – and could not capture the feeling of looking down upon the vast and magnificent natural formations that he was chronicling in his homeland.

The Piper Super Cub is a small two-seater. Fisher squeezes in. He is about to ascend into skies of crystal and cotton in hopes of photographing Nigardsbreen

“There’s about a 30% chance we get to see the glacier,” he says. “There’s a bunch of clouds sitting right there.”

The Piper feels – and rumbles – like an old car. It smells of oil and fuel and everything is manual. Fisher brings in his iPad for navigation, but his aviation software doesn’t have GPS information on glaciers. So he flies using a mix of instinct, observation and Google Maps.

Lots of people are afraid of flying, especially in small planes. When news hits a plane down, it’s usually a small craft.

He adds: “I’ve been told by many pilots that I’m crazy.”

Many glaciers are remote and hard to reach or document – except by satellite or by air, making the tiny Super Cub the perfect vehicle for this photographic journey. It is built to navigate the blustery winds and dangerous environments necessary for his work.

Why risk it? Fisher believes satellite images will never capture glaciers effectively – not aesthetically and not scientifically. The glow of a glacier at “magic hour.” The way shadow falls on the ice, revealing an unending, undefinable blue. The sheer epic presence of these ice goliaths that are in a constant state of unbecoming.

Will the engine quit? He has detailed plans in case of a crash on a glacier. He has calculated that he can survive for about 24 hours if he goes down and has measured the tail of the plane to be sure he can fit into it and stay out of the elements while he waits for help. Not for the faint of heart.

Fisher moves around a lot: The United States, Spain, and Norway. He rarely stops. His wife, Anne, his friend since childhood, drags him to bed most nights; left to his own devices, he says, he would hardly sleep. This is what happens to people so bent on something that everything else starts to fall away.

Until now, Fisher has paid for his passion with his own money, but it’s not cheap; he is running out of funding and looking for backers.

He positions the work carefully. It is, in many ways, science. In other ways, it is public service. But he always comes back to one thing: beauty.

“Science has all of the data we need. They have tons of datasets, which will be available in the future,” Fisher says. “The problem is, it’s not beautiful.”

What he does, he says, is something whose aesthetics are not only pleasing but might encourage people to change their ways.

He adds: “It’s not a dataset. It’s a very motivating, emotionally compelling rendition of these glaciers while they’re here. Because these views will not come back.”

In the end, so much of his work is about memory. But what about the here and now? Can a photograph communicate the profound experience of being in front of something that is soon to be lost forever? In many ways, that is what his work is trying to figure out.

The archive is the thing he has poured everything into, dedicating countless hours. And beyond the archival dreams, he dares to hope for change.

If he finds the right light, the right angle, and the right moment, then maybe people will care more. He’s chasing the perfect image; one so beautiful it can make people and policymakers act. And if it isn’t one image, then maybe an entire archive convinces people to come, to look, to get close, and to pay attention.

Everything disappears. But not yet. There is still time, and Garrett Fisher has an airplane and a camera and is not turning away.