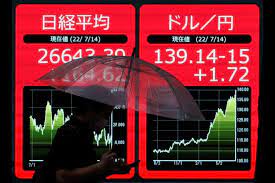 Hong Kong (AFP): Most Asia-Pacific stocks rose on Friday as a Wall Street rebound brought some cheer to the region’s markets on the last trading day of the year.
Data on Thursday showed US jobless claims for the week ending December 24 rose more than expected, signalling some cooling in the economy. That boosted hopes among investors that the Federal Reserve’s rate hikes will ease. The US central bank’s aggressive campaign against inflation had sparked fears of a recession as higher borrowing costs slow down the economy.
Boosted by that optimism, the three main indexes on Wall Street ended higher on Thursday, and Asia-Pacific markets followed suit.
Hong Kong, Shanghai, Sydney, and Singapore were up on Friday, while Tokyo was flat.
In early European trade, London, Frankfurt and Paris were all down.
Trading volumes have been thin in the last week of 2022, with investors in a low-risk mood looking ahead to next year, analysts said.
“Going into the new year, I think investors are going to be focusing on the same things we were focusing on this year, and that’s where the central banks are going to take interest rates, and are the inflation numbers going to force them to continue to be very aggressive,” Chris Gaffney, president of world markets at TIAA Bank, was quoted by Bloomberg News as saying. Central bank policymakers have been particularly concerned about the jobs market, where demand for workers has exceeded supply, with wages picking up quickly.
Rising wages have fueled fears that the elevated cost of delivering services could become permanent, making it harder to bring down consumer prices.
But the latest jobless claims data injected some hope that the labour market in the world’s biggest economy was cooling.
“The main theme for the first half of next year will be economic slowdown, as a result of rate hikes,” said Chihiro Ota at SMBC Nikko Securities.
Markets are also concerned about the impact on global supply chains by the Covid surge in China — the world’s second-largest economy — which has rolled back much of its strict zero-Covid strategy in recent weeks. South Korea on Friday became the latest country to impose a negative virus test requirement for travellers from China. The United States and Japan are among the other nations that have put China-specific restrictions in place because of the outbreak.
However, in oil markets, major importer China’s reopening has sparked some optimism that demand will rise next year, boosting prices.
The Brent and West Texas Intermediate contracts were both trading higher on Friday.
London – FTSE 100: DOWN 0.3 percent at 7,490.76
Tokyo – Nikkei 225: FLAT at 26,094.50 (close)
Hong Kong – Hang Seng Index: UP 0.2 percent at 19,781.41 (close)
Shanghai – Composite: UP 0.5 percent at 3,089.26 (close)
Euro/dollar: DOWN at $1.0662 from $1.0667 at 2130 GMT on Thursday
Pound/dollar: UP at $1.2066 from $1.2062
Euro/pound: DOWN at 88.38 pence from 88.40 pence
Dollar/yen: DOWN at 131.91 yen from 132.96 yen
West Texas Intermediate: UP 0.7 percent at $78.95 per barrel
Brent North Sea crude: UP 0.8 percent at $84.09 per barrel
New York – Dow: UP 1.1 percent at 33,220.80 (close)
Tokyo, Dec 30 (AFP/APP):Tokyo stocks ended flat Friday on the year’s last trading day, with the Nikkei falling more than nine percent over 2022. The benchmark Nikkei 225 index edged up 0.83 of a point to 26,094.50, while the broader Topix index fell 0.19 percent, or 3.56 points, to 1,891.71.
The dollar stood at 132.57 yen, against 132.96 yen in New York on Thursday.
In 2022, the Nikkei lost 9.4 percent, marking the first annual fall since 2018.
The Tokyo market stayed under pressure as the world experienced a bear market, with Russia’s invasion of Ukraine in February prompting the prices of energy and food to soar.
Aggressive central bank rate hikes, notably by the US Federal Reserve, also weighed on investors as inflation took hold in the global economy.