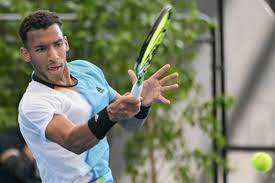 Adelaide (AFP): Australian qualifier Alexei Popyrin stunned second seed Felix Auger-Aliassime in the first round of the season-opening Adelaide International on Monday as Novak Djokovic was given a hero s welcome in a rare doubles appearance.

On a day of upsets, world number 11 Holger Rune also crashed out, as did women s third seed Daria Kasatkina.

Canada s Auger-Aliassime was in top form towards the end of 2022, winning three tournaments in October and November before leading Canada to Davis Cup glory when they beat Australia in the final.

He rose to number six in the world and said before the tournament he wanted to ride the wave of momentum into the 2023 season.

The 23-year-old Australian attacked at every opportunity, hitting 32 winners, including 12 aces.

Popyrin broke Auger-Aliassime once in the first set and although he went down an early break in the second, he was able to claw back then clinch the tiebreak on his first match point.

“So to come out in my first main draw match of the year and beat a player of his quality, it just shows that the work I did in the off-season is paying off.”

The Serbian superstar, who is also playing singles in Adelaide, was deported from the country before the 2022 Australian Open for not being vaccinated against Covid-19 and was subsequently barred from re-entering for three years.

But the ban was lifted in November and he will be attempting to win his 10th Australian Open title later this month.