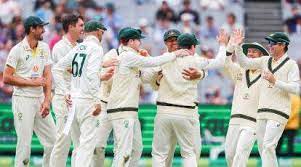 SYDNEY (Reuters): A relaxed and confident Australia head into the third and final test against South Africa in Sydney eyeing a series sweep and a berth in the World Test Championship (WTC) final to cap a dominant home summer.

Pat Cummins’s team, who sealed the series with an innings victory in Melbourne last week, can book their place in the WTC decider at The Oval in June with victory at the Sydney Cricket Ground.

Even with pace stalwart Mitchell Starc and all-rounder Cameron Green sidelined by finger injuries, Australia have ample depth and the freedom to experiment leading in to next month’s four-test tour of India.

In recent years, the SCG has not lived up to its spin-friendly billing but ground staff say the pitch should offer turn.

That could mean a role for Ashton Agar in Australia’s 11 and a first test for the left-arm spinner since 2017.

Cummins said selectors had decided on the lineup but would not reveal it until the toss on Wednesday.

The match should offer “a really good prep” for India, the paceman added.

“Fast bowling and reverse swing is going to come into it, which we can expect in India,” he told reporters on Tuesday.

Australian media have relentlessly plugged uncapped quick Lance Morris as a replacement for Starc after the Western Australian’s eye-catching start in the Sheffield Shield.

However, the ever-reliable Josh Hazlewood is likely to slot back in after missing the last three tests with a side strain.

South Africa, beaten in all facets in the Boxing Day test, have one forced change, with number three Theunis de Bruyn returning home for the birth of his daughter.

Rassie van der Dussen may be in line for a recall, having been replaced by De Bruyn after the series-opening defeat in Brisbane.

Under-pressure captain Dean Elgar said selectors might also opt for another spinner to partner Keshav Maharaj, which would bring Simon Harmer into consideration, likely at the expense of fast bowler Lungi Ngidi.

Though wicketkeeper Kyle Verreynne and Temba Bavuma have made runs, South Africa’s batting has been ruthlessly exposed in Australia.

Elgar has had a dreadful series opening the batting.

The first captain to lead South Africa to defeat in Australia since Graeme Smith in 2005/06, he has managed only 31 runs at an average of 7.75.

For all that, South Africa are fourth in the WTC standings and would retain a mathematical chance of reaching the final if they can turn the tables at the SCG.

“Talk is cheap at the moment and we need to go out and perform,” Elgar said on Tuesday.

“I still feel there’s a lot to play for in this third test.”