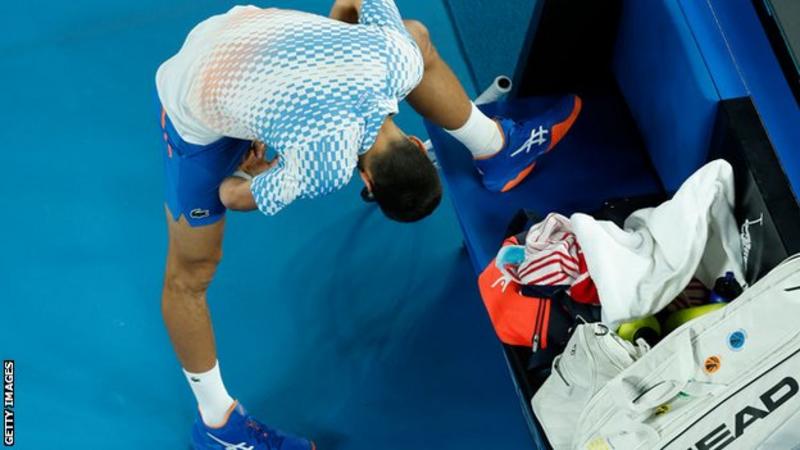 Melbourne (BBC): Novak Djokovic battled through injury to reach the Australian Open third round on another day when more of his expected title rivals were knocked out.

The 35-year-old Serb, going for a record-extending 10th men’s triumph in Melbourne, won 6-1 6-7 (5-7) 6-2 6-0 against French qualifier Enzo Couacaud. Djokovic had a medical timeout, seemingly hampered by an existing hamstring injury, but came through. A day after Rafael Nadal exited, second seed Casper Ruud was also beaten. The Norwegian, who reached two Grand Slam finals last year, lost 6-3 7-5 6-7 (4-7) 6-2 to American Jenson Brooksby. In the same quarter of the draw, eighth seed Taylor Fritz also lost 6-7 (4-7) 7-6 (7-2) 6-4 6-7 (6-8) 6-2 to Australian wildcard Alexei Popyrin. Twelfth seed Alexander Zverev, still in the early days of his return from a serious ankle injury, was beaten 6-7 (1-7) 6-4 6-3 6-2 by lucky loser Michael Mmoh, who was a late call-up to the main draw after another player withdrew and said he had to change his flight because he had expected to already be out. Russian fifth seed Andrey Rublev suffered no such upset, beating Finland’s Emil Ruusuvuori 6-2 6-4 6-7 (2-7) 6-3 to set up a third-round meeting with Britain’s Dan Evans.

Djokovic entered the Rod Laver Arena with his left thigh heavily taped but it was his opponent Couacaud who struggled with injury early on, rolling his right ankle midway through the first set and requiring a medical timeout. Djokovic cruised through the rest of the opener but twinges in his hamstring – which was already bothering him before the start of the tournament – slowed him down and allowed Couacaud into the contest. The Serb left the court for treatment and returned with fresh, tighter dressing on his leg.

The 27-year-old Frenchman, making his Australian Open debut in 2023, took advantage and forced the 21-time Grand Slam champion into a second-set tie-break as the crowd got behind his every shot, much to Djokovic’s frustration.

With play defying his ranking of 191, Couacaud bounced back from 3-0 down in the tie-break to mark the first time Djokovic has lost a set to a qualifier or lucky loser in Melbourne since 2009.

But something switched in Djokovic’s mind at that point, and his relentlessness returned. The fourth seed breezed through the third set in little over half an hour, although faced another challenge in the fourth set in the form of hecklers in the crowd who he said were “drunk out of their mind”. After asking the umpire “what he was going to do about it”, the hecklers were eventually removed and Djokovic regained his focus, knocking Couacaud out with a bagel he did not deserve. Djokovic will play his “Balkan brother” Grigor Dimitrov of Bulgaria in the third round, a player he has beaten on nine occasions but not played since 2019. “A lot happened tonight in tonight’s match,” Djokovic said in his on-court interview.

“Enzo deserves credit for the fight, he played some great tennis, especially in the second set.

“We both had medical timeouts and struggled a little but, but I managed to respond well in the third and especially the fourth.”

The exit of Ruud, last year’s French and US Open runner-up, means he must wait for another opportunity to land a first Grand Slam title and ended his chance to become the world number one.

The 24-year-old Norwegian was outplayed by world number 39 Brooksby, who took control early with two breaks of serve in the opening set and commanded play from the baseline in the second.

Ruud, who later said he had felt “tension and some slight pain” in his abdomen but refused to blame that for his performance, saved three match points in the third before winning a tie-break to force another set.

But 22-year-old Brooksby regrouped to break early in the fourth, sealing the win when his opponent sent a backhand long.

“Casper’s a warrior, I knew it’d be a great battle out there. I was pretty confident with my level and just wanted to have fun out there and see what could happen,” Brooksby said in his on-court interview.

“I was really proud of my mental resolve out there after the third-set battle didn’t go my way to turn it around.”

Brooksby will face Tommy Paul in the next round after his compatriot beat Spanish 30th seed Alejandro Davidovich Fokina in five sets.

The men’s draw was already without last year’s Wimbledon runner-up Nick Kyrgios, who withdrew before the tournament through injury, leaving Djokovic as the overwhelming favourite, assuming his hamstring holds up.