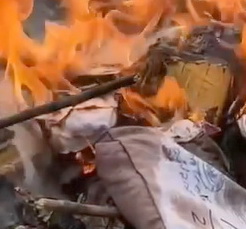 LOWER DIR: The Adenzai police in the presence of a judicial magistrate on Thursday set ablaze at the Chakdara Fishing hut. Briefing local journalists on the occasion the judicial magistrate Ilyas Khalil said that a total of 41 cases of drugs’ seizure were registered by the Ouch police station, 3 by Asbanr and 39 by the Chakdara police station. He said that a total of 23353 grams of charas, 1485 grams of heroin, 88 grams of ice and 9.5 liters of liquor were destroyed.

The narcotics’ destruction process was supervised by judicial magistrates Ilyas Khalil and Tariq Khan while station house officers Ouch and Chakdara Muhibullah Khan and Shah Faisal were also present. The magistrate said that drugs were destroying the young generation, especially the ice that was used by the students. He said the accused of these cases had been convicted in the courts and the time of appeals had expired.