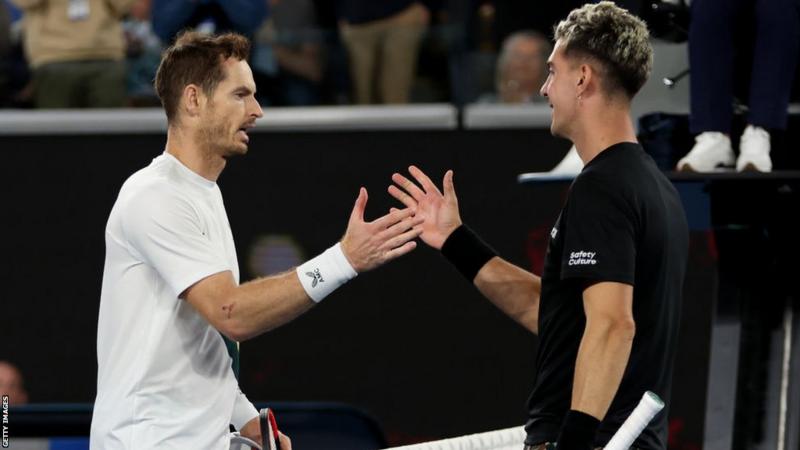 MELBOURNE (Agencies): Andy Murray says finishing his second-round match at the Australian Open at 4am was a “farce”.

“I don’t know who it’s [the late finish] beneficial for,” said Murray on court after the Kokkinakis match.

“We come here after the match and that’s what the discussion is, rather than it being like, ‘epic Murray-Kokkinakis match’. It ends in a bit of a farce.

“Amazingly people stayed until the end, and I really appreciate people doing that and creating an atmosphere for us. Some people obviously need to work the following day and everything.” Murray was two sets down and looked to be heading out of the competition before digging deep to defeat 26-year-old Kokkinakis, who is ranked 159th in the world, 4-6 6-7 (4-7) 7-6 (7-5) 6-3 7-5.

He will face Spanish 24th seed Roberto Bautista Agut in the third round.
The rowdy fans inside the venue were treated to a fine spectacle from both players – despite it approaching the six-hour mark – but Murray also highlighted another problem with overly-long matches. “If my child was a ball kid for a tournament and they’re coming home at five in the morning, as a parent, I’m snapping at that. It’s not beneficial for them,” said the three-time Grand Slam winner.

“It’s not beneficial for the umpires, the officials. I don’t think it’s amazing for the fans. It’s not good for the players.” The match start time of 22:20 was also an issue, according to Murray. “We talk about it all the time, and it’s been spoken about for years,” said the Scot. “But when you start the night matches late and have [cold] conditions like that, these things are going to happen.” Tournament director Craig Tiley said on Friday there was no need to change the schedule “at this point”, pointing to the rain and extreme heat that delayed play earlier in the week. “We will always look at it when we do the tournament like we do every year,” Tiley told Australia’s Channel Nine.

“It was an epic match and when you schedule a match like that just before 10pm in the evening, you’re not expecting it to go close to six hours.”

Third seed Jessica Pegula, who is on the WTA Players’ Council: “It is ridiculous to be asking people to be there at that time. I don’t think there is any job where people are volunteering – such as ball kids – who are required to be there that late. It’s not healthy for anyone. “It can affect the players going into the next round and at this stage – at such a high level – that stuff is really important, especially for someone like Andy who needs time to recover and physically feel right for the next round.

“I definitely think it needs to change and trust me, it is definitely something we want to discuss but also has to come from men’s side.”

Jamie Murray, doubles player and Andy’s elder brother: “From a physical and mental perspective, resiliency and fighting spirit, it is just remarkable. But finishing at 4:30am is great for everyone in the UK but not people in Australia.

“Scheduling needs to be seriously looked at, if people are putting their head in the sand it is not the way forward. It is easy for me to say that after what happened to Andy but it could happen to anyone.

“Tennis has had issues with how long matches are taking for too long.”

World number four Stefanos Tsitsipas: “You have to deal with it. It started at a reasonable time, I would say. Kokkinakis made it long. Murray made it long too. “I think tennis likes these kind of matches. There’s a great story behind this match, and it’s going to be remembered.” Eighteen-time Grand Slam singles champion Martina Navratilova on Twitter: “It is essential we create better rules in tennis regarding the weather (light and wind) and starting times or cut-off times for matches. “Murray and Kokkinakis will finish around 4am. Crazy – no other sport does this.”