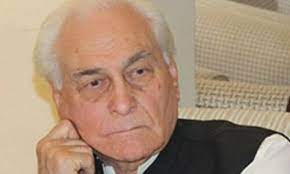 PESHAWAR: In a surprising development, the Khyber Pakhtunkhwa government and the opposition have reached an agreement on the name for the interim chief minister in the province.

The name of former KP chief secretary Azam Khan was unanimously agreed upon in the meeting held to finalise the appointment of the province’s caretaker CM. “Azam Khan is our consensus candidate for the post of caretaker chief minister. We have chosen a person who is acceptable to all,” said Jamiat Ulema-e-Islam Pakistan-Fazal (JUI-F) leader Akram Khan Durrani.

Commenting on the development, KP Chief Minister Mahmood Khan said the name of a caretaker chief minister was unanimously agreed upon for the first time in “history”. “We agreed on Azam Khan in consultation with our leader,” Khan said revealing Pakistan Tehreek-e-Insaf Chairman Imran Khan’s nod for the candidate.

The nominee has held the office of federal secretary for the ministries of religious affairs and petroleum. He had obtained his Bar at Law degree from the Lincoln’s Inn, London. While the KP Assembly’s dissolution took place much later than the Punjab Assembly, the unanimous decision of naming the caretaker chief minister was done more rapidly in the northwestern province.

Earlier the Chief Minister Khyber Pakhtunkhwa Mahmood Khan and former Governor Shah Farman held consultations for nomination of caretaker chief minister for the province. According to an official handout issued here on Friday, the Chief Minister and former Governor have developed consensus over two names.
However, the names were not mentioned. It said that their names would be sent to KP Governor after approval from the PTI chairman, Imran Khan.

He urged upon authorities to avoid delays in the implementation of the project adding that all pre-requisites, including the land acquisition process, be completed as per the stipulated timelines so that the civil work on the project can be initiated. The Chief Minister issued these directives while chairing a progress review meeting held here at Chief Minister house Peshawar.

It is pertinent to mention here that 30 km long Dir motorway project would be constructed from Chakdara interchange, Malakand to Baroon, Dir Lower via Ramial and Och village. The project consists of 04 lanes (2 lanes each side) with 50 meters right of way and would also have 625-meter-long twin tube tunnel and 2 single tube tunnels with the total length of 6320 meters.

Regarding the overall progress on the project, the forum was informed that the commercial and financial feasibility study had been approved by PPP committee whereas financial evaluation, of the bid received, has also been completed. Similarly, land acquisition process has been initiated in coordination with district administration Lower Dir.

The Chief Minister said that the project will play an important role in development and prosperity of the region. It was the long-standing demand of people due to which the provincial government has decided to launch the project despite multiple challenges, he remarked.

The Chief Minister made it clear that the provincial government has made every possible effort to develop the backward areas of the province on sustainable basis. Despite financial difficulties, multiple projects have been launched for this purpose. The main objective is to bring about a positive change in the life of the people for which all available resources have been utilized in an effective manner.

The Chief Minister maintained that his government has not only taken visible steps to align the sectors of social services with contemporary needs, but has also spent billions of rupees on strengthening the revenue generating sectors with special focus on the road network. Once completed, the province would become a transit corridor for regional trade and commerce activities, he concluded.