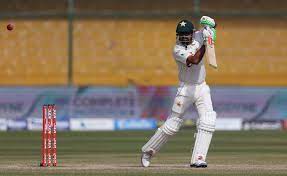 KARACHI (AFP): Babar Azam became the first Pakistani in six years to score 1,000 Test runs in a calendar year and the fourth batter to reach the milestone in 2022 during the third Test against England in Karachi.

He is the sixth Pakistani batter to reach 1,000 in a year, crossing the total when he reached 45 during an innings that ended on 54.

Despite Babar’s solid form, Pakistan are staring at a first-ever 3-0 series whitewash on home soil.

Babar will have one more game in which to add to his 1,009 in 8 Tests when Pakistan take on New Zealand next week.

Australian Usman Khawaja (1,079 in 10 Tests) and England’s Jonny Bairstow (1,061 in 10) are the other batters to have achieved the feat in Test cricket this year.

Yousuf’s aggregate is the most by any batter in a calendar year.