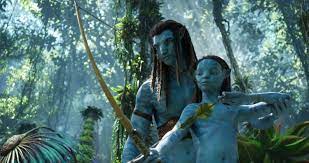 That big number — roughly 10 times the total take of the next four films on the top 10 — was nevertheless below analysts’ expectations for the Friday-through-Sunday period.

That makes it one of the biggest cinematic openings in pandemic times, and its combination of dazzling visuals and big-screen lure are expected to be a box office draw for weeks.

“Expectations aside, this is outstanding,” said David A. Gross of Franchise Entertainment research. “The movie is set up for a very strong run through the holidays.”

“The Way of Water” picks up the story of the extrasolar moon Pandora more than a decade after the events portrayed in the 2009 original.

US Marine Jake Sully (played by Sam Worthington) has by now transitioned into one of the tall, blue Na’vi people and works with them to protect their home from an ominous threat.

Disney/Marvel powerhouse sequel “Black Panther: Wakanda Forever,” which had topped the box office for five weeks, was pushed back into a distant second by “Avatar,” with a weekend take of $5.4 million.

Its domestic total now stands at a solid $419 million.

In third place was action comedy “Violent Night” from Universal at $5 million. David Harbour stars as Santa Claus, with a twist: he is forced to fight a team of mercenaries who have taken a wealthy family hostage in Connecticut.

And rounding out the top five was Searchlight’s horror-comedy “The Menu,” starring Ralph Fiennes, at $1.7 million.

The rest of the top 10 is as follows: