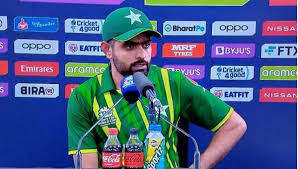 While addressing a press conference in Karachi, he said that it was the duty of the Pakistani cricket team to show performance in the ground.

He added that the players would do their best to play well against New Zealand. “The pitch looks good. I hope we will play well,” he stated.

“We have not finalised the playing XI. We will do that after discussion with the chief selector,” he added.

The prolific right-hander pointed out that the strategy of playing cricket was decided after inspecting the situation of the ground.

The Pakistan captain also said that the focus of the team was to win the Test series against New Zealand.

He also expressed his regret over losing Test series to England. “We could not play well against England,” he regretted.

New Zealand captain Tim Southee also addressed the press conference in Karachi and expressed his hope that the Kiwis would enjoy the play in Pakistan.

“Pakistan is a tough contender. We will try to play our best,” he added.

He also pointed out that Pakistan lost to England, adding: “But will not take it easy. We are so happy for this series.”

It is to be noted here that the first Test match between Pakistan and New Zealand will commence in Karachi from Monday (tomorrow).

The second Test match will be played in Multan from the 2nd of the next month.

The ODI matches will start in Karachi from the 10th of the next month.

Twenty-seven full high-resolution cameras will be installed and complete Hawkeye review system will be available for the two series.

Meanwhile, New Zealand team participated in a training session ahead of the two-match Test series at the National Bank Cricket Arena in Karachi.

After the physical training, they participated in practice sessions in group format, with groups of five to six players engaged in batting, fielding, catching, and bowling practice.

On the other hand, home side will commence their preparation from tomorrow onwards.