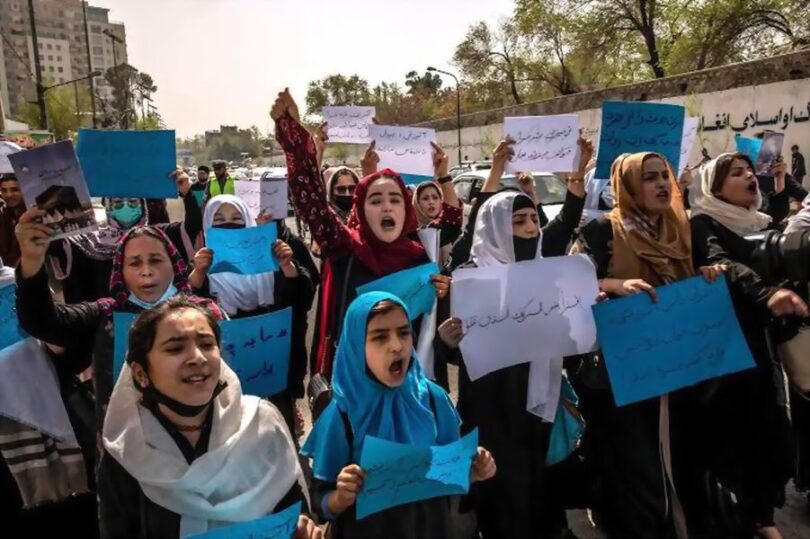 KABUL: The Taliban has recently issued a notification banning girls from attending educational institutions, after which there has been a strong reaction from around the world.

The female students of Afghanistan are protesting for their rights after the Taliban government’s notification, Afghan girls are also facing mental pressure along with deprivation of education.

Naveeda Hafizi, a student of political science in Afghanistan, told The Frontier Post that the Taliban are promoting their political ideology by banning girls’ education, but keeping girls out of education means dragging Afghanistan down.

She added that keeping girls away from education means depriving more than half of Afghanistan’s population of their rights. It is our basic human right and we need equal representation in every institution, many international organizations are silent on this issue but we will continue our struggle for all our rights.

Farah Naz Alkozai, an Afghan journalist and women right activists said that girls in Afghanistan are currently going through a psychological crisis and they are facing fear for their future, how they will continue their studies and those who work in other fields are worried about their livelihood and the future of their children.

She added that ever since the Taliban took over the government, they have focused only on women, banning girls’ education and limiting the role of women in society,

Women have an important role in society, Afghan women have all the rights that other human beings have in the world, Islam has also given women the right to education, then on what grounds have the Taliban banned their education?

Marzia Hafizi, an Afghan journalist and women’s rights activist said that the Taliban are taking such steps due to which the distance between them and the people is increasing. If the Taliban want to rule Afghanistan and save the country from harsh conditions and go along with the international community, they need to reform and change their governance.

Girls do not carry arms nor do they fight but they are raising their voices peacefully for their basic rights and it will pay off one day.
Apart from education, there is a need for women’s representation in every sector so that they can serve other women, listen to their problems and solve them.

The current situation and what the current government are doing is not in the interest of Afghanistan and the people, this situation can push the country towards civil war.

Rahat Ullah Shafaqzoy, a global peace chain ambassador and women rights activist in Afghanistan said that in the democratic government, women were working in all fields, but the Taliban government has stopped women from working, which not only deprived women of their rights but also caused them financial and mental problems.

He added that the lives of women as well as common people have been adversely affected. For those who want to go to foreign countries, the passport conditions are strict and the fees are increased which is very unfortunate.

The Minister of Higher Education of Islamic Emirate Afghanistan Nada Muhammad Nadeem has said in one of his statements that the current education system is not compatible with the Afghan culture, Hijab is obligatory, and women will be given as many rights as Islam has given.

Mufti Shahabuddin Popalzai, an Islamic scholar from Peshawar, has said in his tweets that if veiling of women is the order of Allah, then the acquisition of knowledge is also a duty, he said in another tweet. That the philosophy and thought of banning women to not go out of the house are not Islamic. It may be a tradition and custom of a region, but it has nothing to do with Islam. Therefore banning women’s education on the pretext of veiling is against Islam and the teachings of the Quran and Sunnah do not allow it at all.