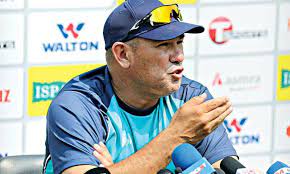 Domingo, 48, had already been partially sidelined earlier this year when he was stripped of his role overseeing the T20 side right before the Asia Cup.

The South African’s departure will leave Bangladesh scrambling to find a replacement before they host England in February. “We received his resignation letter last night.

We will now start working to appoint a new head coach before our next series,” Bangladesh Cricket Board operations chief Jalal Yunus told AFP. Jalal said all other coaching staff members, including pace bowling coach and fellow South African Allan Donald, will remain in their roles despite Domingo’s resignation.

Bangladesh won its ODI series against India 2-1 but lost both Tests.