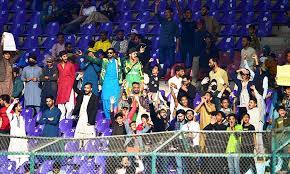 KARACHI: The Pakistan Cricket Board (PCB) announced on Wednesday free entry for Karachiites, in all stands except for two VIP enclosures, during the second Test between Pakistan and New Zealand.

The tickets will be available on a first-come-first-served basis, PCB Chairman Najam Sethi told the private channel. It is pertinent to mention that the Javed Miandad and Hanif Mohammad enclosures hold VIP status and their tickets are worth Rs500 per day.

Separately, PCB has also started approaching universities, schools, and other educational institutions to bring students to the stadium. The board added that it will reach out to old age homes and orphanages as well.

The second Test between the hosts and the Kiwis will be played from January 2 to January 6 at the Karachi National Stadium. Today’s development comes as PCB struggles to attract people to the stadium and stands remained empty during the first Test match between the two teams. Last week, the board shifted the second Test of the series, which was initially scheduled in Multan, to Karachi due to deteriorating weather conditions in Multan — which have disrupted flight operations and may also potentially result in the loss of playing hours.

“It has been agreed that the second Test and the three ODIs will now be brought forward by a day, meaning the second Test will commence on January 2 with the three ICC Men’s Cricket World Cup Super League fixtures to be played on January 9, 11 and 13,” it had said in a statement.

Here is the itinerary of the matches: