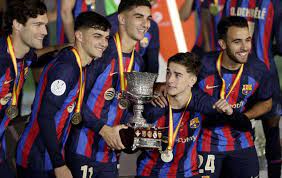 Barcelona (AFP): Barcelona s young players, leading by teenage sensation Gavi, were at the heart of the club s first trophy for nearly two years as they thumped rivals Real Madrid in the Spanish Super Cup.

Gavi, 18, scored and fashioned two more in their 3-1 victory on Sunday, including one for 20-year-old Pedri, while defender Ronald Araujo shackled Vinicius Junior and Alejandro Balde excelled on the other flank.

“A new era has started,” yelled an ecstatic Araujo as he ran back to the dressing room with his medal, after wild celebrations on the pitch in Saudi Arabia.

The ushering in of a new start for Barcelona is the club s fervent hope, after they lifted their first trophy in the 21st century without Lionel Messi being part of the squad.

When the Argentine icon left for Paris Saint-Germain in 2021 after spending his whole career at the club, it shook Barca and the football world.

Deluged by debt, the Catalans spent big in the summer, a spree funded by mortgaging part of their future television income, among other methods.

They signed Robert Lewandowski, who also netted against Madrid in the Super Cup triumph in Saudi Arabia, as well as Jules Kounde and Raphinha among others.

Gradually the Barcelona team which conquered Europe in 2009, 2011 and 2015 is being dismantled, with only a couple of veterans remaining.

Xavi was one of the first to depart, leaving on top of the world after winning the treble in 2015, and now he has been working on reshaping a club which president Joan Laporta said was “almost dead” when he took over.

There is a young core to Xavi s team, with Gavi and Pedri key to the reshaped midfield, while Araujo and Kounde are in their early 20s.

Balde, 19, has displaced veteran Jordi Alba at left-back more often than not this season, while hopes Ansu Fati can become the team s star still remain.

The 20-year-old forward scored a stellar volley against Real Betis in the Spanish Super Cup semi-final on Thursday, and is still rebuilding his game and his form after serious injuries.

Gavi was particularly devastating against Real Madrid, operating from the left but coming inside to help Barcelona dominate the midfield.

Madrid defender Dani Carvajal was totally overwhelmed by the combination of the midfielder and Balde on the left wing.

“When you see (Gavi) compete like that, putting his soul out there, he s a character that is contagious for the team, he has an innate capacity for leadership,” said Xavi.

“It comes from inside, it s spectacular. At 18, I have said it many times, but don t let it stop, he has no ceiling this boy.”

Busquets labelled Gavi a “competitive animal” while Laporta heaped praise on both him and Pedri.

“They are two players with both a present and a lot of future,” enthused Laporta.

“They can give Barca glorious games and win many titles. Pedri is a magician and Gavi is spectacular, the energy he has in every game and now with more patience, and goals.”

A month ago Xavi said both Gavi and Pedri were better than he and former team-mate Andres Iniesta were at the same age.

“When Andres and I were 20, we weren t at the level they are now,” said Xavi in January.

“(And) Balde s potential is marvellous, he will be Barca s full-back for the next fifteen years.”

Barcelona celebrated the win joyously at the King Fahd International Stadium and later, singing songs and dancing in the dressing room.

“It s a Clasico and a final, we celebrated it to the max,” Gavi told reporters.

“A title with Barca is something that I have been desiring since I made my debut.”

Barcelona — who are just three points behind Real at the top of the Liga — are hoping it is the first piece of silverware of many, and the start of the new era heralded by Araujo.