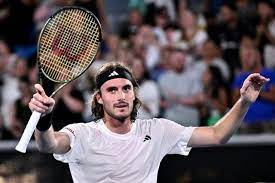 MELBOURNE (AFP): Third seed Stefanos Tsitsipas credited his fighting spirit for helping bank a fifth straight win of the year Monday to speed into the Australian Open second round, as he targets a maiden Grand Slam title.

He will play either German qualifier Yannick Hanfmann or Australian wildcard entry Rinky Hijikata next.

Tsitsipas led the ATP Tour for most matches won (61) last year and reached seven finals, winning two of them.

He has started 2023 in the same vein, winning all five matches so far this season after going 4-0 at the warm-up United Cup for Greece.

Tsitsipas raced through the first two sets against Halys, but struggled in the third, broken twice before battling back from 2-0 down in the tiebreak.

“It was challenging, he came up with some good tennis in the third set, I kind of lost my rhythm in the serve, I wasn t expecting to get broken twice in a row,” he said.

“So I had to find ways to get out of the difficult situation. I think my fighting spirit showed towards the end, I wasn t going to give up.”

The world number four burst onto the scene at the Australian Open in 2019 when as a 20-year-old he dethroned defending champion Roger Federer in the last 16.

He went on to reach the semi-finals that year and again in 2021 and 2022, highlighting the consistency that has made him a mainstay of the world s top 10 for nearly four years.

But a Grand Slam crown remains elusive, with his runner-up showing at Roland Garros in 2021 his best result at a major so far.