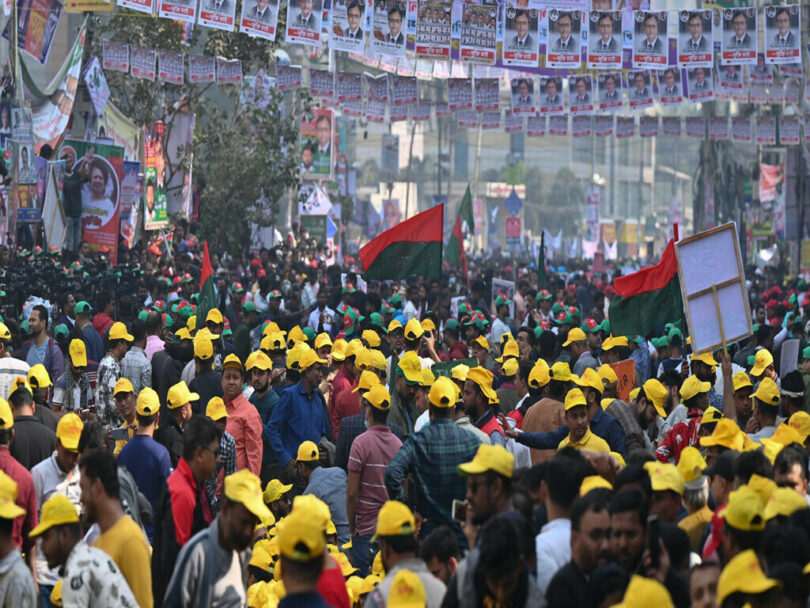 DHAKA (Agencies): Thousands of supporters of Bangladesh’s main opposition party have rallied across Bangladeshi cities to demand Prime Minister Sheikh Hasina’s resignation and the formation of a caretaker government to conduct general elections. The Bangladesh Nationalist Party (BNP) and its allies staged protests in the capital Dhaka and nine other cities on Wednesday, the latest of several demonstrations in recent months amid mounting anger over the rising cost of living.
The opposition and rights groups have criticised the Hasina government for cracking down on anti-government protests. Bangladesh is one of the fastest-growing economies in Asia, but rising global food and fuel costs linked to the war in Ukraine forced Hasina’s government last year to impose lengthy power cuts and expand food handouts to the poor.
Several people were injured in the central city of Faridpur when supporters of the governing Awami League attacked protesters while brandishing sticks and hurling Molotov cocktails. Al Jazeera’s Tanvir Chowdhury, reporting from Dhaka, said the political crisis seems to be having a “new dimension”. “This rally has been an ongoing movement, this particular day has been called by an alliance of 32 different political parties,” Chowdhury said from a gathering among thousands.
He said people from “all walks of life” joined the demonstrations to protest against rising food prices and to express their dismay at how the government has handled crippling inflation. “It appears that the movement is going to continue until there is some resolution,” Chowdhury added. “The time to cling to power by force is over,” senior BNP leader Mirza Abbas said at a sit-in outside party headquarters in the capital.
“Let a neutral government hold an election.” Police estimated up to 50,000 people attended the rally addressed by Abbas, who was released from prison on Monday a month after a sweeping crackdown on opposition activists. BNP officials said hundreds of thousands had turned up in Dhaka alone, with thousands more joining sister rallies around the country.
“Living costs have always been a headache,” university student Abu Nayem told the AFP news agency in Dhaka. “The government might not have a problem with this, but people like me are dying. I came to protest this careless apathy.” The Bangladeshi taka has depreciated by up to 25 percent, driving up the cost of food imports and making life harder for the country’s poorest citizens.
Meanwhile, police said at least four people were wounded in the Faridpur clashes. “We fired rubber bullets to bring the situation under control,” a senior city police officer told AFP, speaking on the condition of anonymity. Shama Obaed, a BNP leader at the Faridpur rally, told AFP that at least 100 people were wounded and more than 30 had been detained.