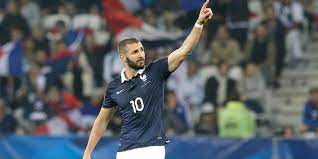 DOHA (Agencies): Ballon D’Or winner Karim Benzema announced he was ending his international career on Monday, the day after France lost in the World Cup final to Argentina.

“I made the effort and the mistakes it took to be where I am today and I’m proud of it! I wrote my story and ours ends,” Benzema, 35, wrote on Twitter.

Benzema, who scored 37 goals for France in 97 appearances, had to withdraw from France’s World Cup squad before their first match due to a left thigh injury.

The Real Madrid player, who won the Ballon d’Or award in October, had been desperate to feature in Qatar having not been selected when France won the World Cup in Russia four years ago.

He was frozen out of the France team for five and a half years because of his involvement in a blackmail scandal over a sextape involving his former teammate Mathieu Valbuena.

For the Qatar World Cup, coach Didier Deschamps opted not to call up a replacement and France still had depth in their squad, particularly in an attack led by 23-year-old Kylian Mbappe.

Paris Saint-Germain forward Mbappe won the World Cup Golden Boot award with eight goals, including a hat-trick in Sunday’s penalty shootout defeat by Argentina following a 3-3 draw at the end of extra time.