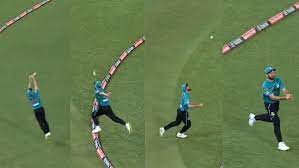 SYDNEY: Michael Neser grabbed a sensational catch during the high-scoring encounter between Brisbane Heat and Sydney Sixers in the Big Bash League, which the former won by 15 runs.

Neser’s match-turning effort came in the penultimate over of the Sixers’ gigantic 225-run chase as Jordan Silk was dismissed for 41 off 23 deliveries.

Silk was going strong in the middle and had already hit three 4s and two 6s. The catch, if not taken, would have resulted in another maximum, but Neser’s smart thinking brought an end to Silk’s sublime display in the middle.

Neser, positioned at deep, caught the ball well inside the boundary rope, but upon realising that he would cross the boundary line, he tossed the ball up. However, his release saw the ball go a little too much over the fence but Neser didn’t stop there.

After crossing the fence, Neser once again looped the ball in the air, ensuring none of his parts made any contact with the ground and then completed the catch calmly inside the playing area.

Despite the brilliant piece of fielding, his efforts were questioned by both fans and experts, forcing people to consult the rulebook.

Australia legend Adam Gilchrist, who is part of the Fox Cricket commentary panel, was one of the many confused, wondering why was it given out. He later admitted that it was a legal dismissal and well within the rules.

So what does the rule actually say?