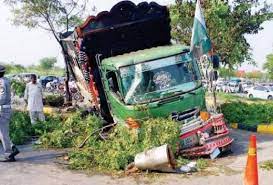 PESHAWAR: Seven people including women and children were killed and five others injured in a head-on collision between a dumper and a carry van on Indus Highway in Darra Adamkhel town of Khyber district on Monday.

The personnel of the Kohat’s Rescue 1122 shifted the bodies and the injured of the accident occurred near Tunnal to a nearby hospital.

Condition of some of the injured was serious and were shifted to Hayatabad Medical Complex in Peshawar.