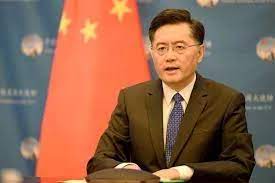 ISLAMABAD: Foreign Minister Bilawal Bhutto Zardari has facilitated Qin Gang on his appointment as new foreign Minister of China. In a Tweet on Saturday, the foreign minister said he is looking forward working with him towards, taking China-Pakistan all-weather cooperative strategic partnership even to greater heights.

Meanwhile, Qin Gang in his reply thanked Bilawal Bhutto for his warm congratulations and reciprocated the sentiments he expressed in his Twitt.

QIN Gang was appointed as the new foreign minister, according to a decision made by the 13th National People’s Congress (NPC) Standing Committee on Friday.

Qin Gang, the incumbent Chinese Ambassador to the US, is replaced Wang Yi, who is a member of the Political Bureau of the CPC Central Committee and State Councilor. (INP)