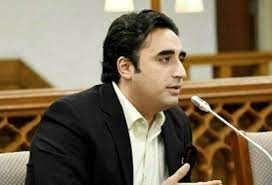 KARACHI: Chairman Pakistan People’s Party and Foreign Minister Bilawal Bhutto Zardari has called Quaid-e-Azam Muhammad Ali Jinnah’s concepts of democracy, equality, adherence to the Constitution and the rule of law as a beacon of light.

Today, there is a need to review the national situation and in the light of the political principles and vision of the father of the nation, to discourage false ego, selfishness and hatred from the country’s politics, he said in his message here Saturday on the birth anniversary of Quaid-e-Azam Muhammad Ali Jinnah. Congratulating the countrymen on the 146th birthday of the Father of the Nation, the PPP Chairman said that the best way to pay homage to Quaid-e-Azam Muhammad Ali Jinnah was to follow his vision for the Constitution, rule of law and selflessness and dedication to the country. He said that Quaid-e-Awam Zulfikar Ali Bhutto and Shaheed Mohtarma Benazir Bhutto had taught us to fight for political rights and serve the nation in the light of the ideology and vision of the Father of the Nation.

Foreign Minister Bilawal Bhutto Zardari said that Pakistan was still following the foreign policy of its founder, Quaid-e-Azam, based on friendliness and goodwill to all the nations of the world. “We do not cherish aggressive designs against any country or nation. We believe in the principle of honesty and fairplay in national and international dealings and are prepared to make our utmost contribution to the promotion of peace and prosperity among the nations of the world,” he added while quoting the Father of the Nation.

The PPP Chairman also reiterated his determination that Pakistan People’s Party would continue its struggle to strengthen democracy, rule of law and respect for human rights in accordance with the vision of Quaid-e-Azam Muhammad Ali Jinnah. (NNI)