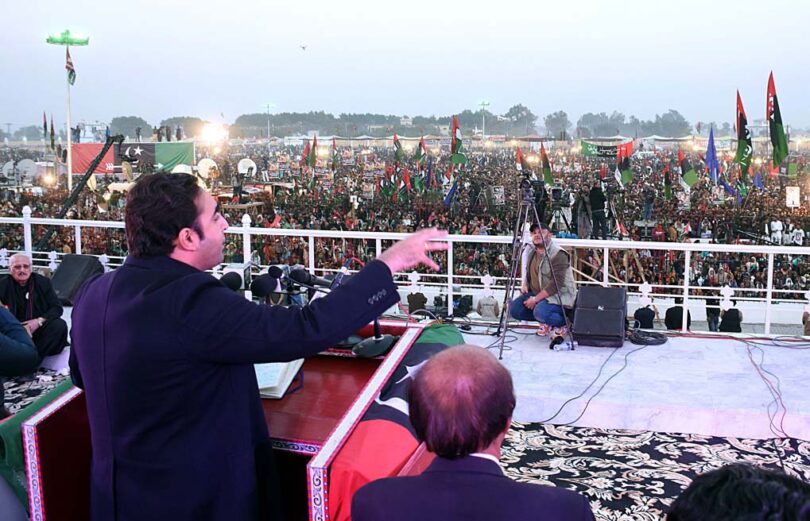 GARHI KHUDA BUKHSH: Pakistan’s Foreign Minister and Pakistan Peoples Party (PPP) Chairman Bilawal Bhutto on Tuesday said that unlike the proclamations of Pakistan Tehreek-e-Insaf (PTI) Chairman Imran Khan that there was an American conspiracy, the former prime minister was ousted through a conspiracy hatched by ‘Bilawal House’.

He said this while addressing a mammoth rally in Garhi Khuda Bukhsh in Larkana on Tuesday to commemorate the 15th death anniversary of PPP slain chairman and former prime minister Shaheed Mohtarma Benazir Bhutto.

He said that the conspiracy against the ‘selected’ was not hatched behind closed doors, rather it happened on the streets and in the parliament in plain sight.

“Bilawal House, not White House ousted Pakistan Tehreek-e-Insaf (PTI) chairman Imran Khan from power,” he said.
Bilawal Bhutto said that the ‘selected’ (a term for former prime minister Imran Khan to denote alleged political engineering to bring him into power), has no political future in the country.

“The future is for common people of the country and for democracy,” he said. “Now it is time to say to goodbye to the handlers of the selected,” he added.

He further said that in the past, the PPP challenged the dictator General (retired) Pervaiz Musharraf, and ousted him through democratic means.

He said that we have to unite as a people and not ignite conflicts, adding that they have had to struggle to obtain democratic rights for the sake of the country. He said that Benazir Bhutto has provided rights to laborers and the underprivileged.

“We have to complete the work left behind by Shaheed Benazir and restore their democratic rights by all means,” he said. “My mother was a patriotic Pakistani and her name was carved not only in country’s history but across the world. She was the voice of the poor, an ambassador for the destitute, a true supporter of democracy, and a strong answer to terrorists,” said Bilawal. “it is our responsibility to follow Bibi’s vision and achieve the mission she had set out on,” the PPP chairman stressed.

“President Zardari and I tried to take her mission forward and whatever work is left will be completed in the next 15 years,” he promised.
Launching a tirade against PTI chief Imran Khan, he said Khan attacked the 18th amendment, which gives legislative and financial autonomy to the provinces, many times for his personal gains. “We ousted Imran Khan through a no-trust motion and saved the country from a fascist leader,” thundered Bilawal.

The foreign minister held Imran Khan responsible for rising terror attacks in the country, saying he bent his knees in front of the proscribed TTP without asking people and parliament. He added that he would urge the government to review policy towards terrorism, adding that “we will have to quit that policy and establish the writ of the state.”

“Only the PPP has the ability to steer the country out of the prevailing crisis because we had dealt with the terrorists effectively in the past and will do so in future as well,” he added.

Furthermore, he said that the next time would be for jiyalas, suggesting that in the next general elections, the PPP
will win.