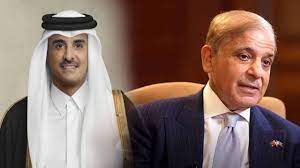 In a telephonic conversation, the Prime Minister thanked the Amir for the generous humanitarian assistance provided by Qatar in the wake of the devastating climate-induced floods in Pakistan earlier this year. He recalled that Pakistan now faced the enormous challenge of rehabilitation and reconstruction in a climate-resilient manner.

The Prime Minister highlighted that while Pakistan had mobilised its own limited resources to the extent possible, continued international support and solidarity was required to meet the daunting challenge of recovery, rehabilitation and reconstruction of the affected areas, and to build resilience against future climate shocks. Shehbaz Sharif congratulated the Amir on Qatar’s successful hosting of FIFA-2022 Football World Cup, which had set a new benchmark for international sports events. The Prime Minister and the Emir of Qatar also exchanged.

PM condemns misuse of Punjab Anti-Corruption for political vendetta: Prime Minister Shehbaz Sharif on Tuesday strongly condemned the arrest of Member of the National Assembly of Pakistan Muslim League (Nawaz), Muhammad Ashraf, and said the Anti-Corruption Department, Punjab was being used as a tool of political vengeance. He said on the behest of Pakistan Tehreek-e-Insaf’s Imran Khan, the department was being used against politicians.

The prime minister regretted that like National Accountability Bureau and Federal Investigation Agency, the Anti-Corruption Punjab was being exploited. He stressed that instead of pressurizing the politicians, there was a need to focus on the problems of the general public. Shehbaz Sharif expressed solidarity with the arrested politician Muhammad Ashraf. (INP)