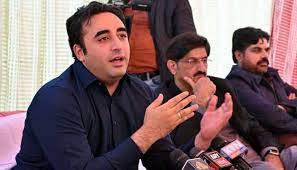 In a statement, the foreign minister reiterated PPP’s desire to hold local government elections, saying that attempts were being made to remove the reservations of allied parties. Responding to one of the MQM-P reservations, Bilawal Bhutto noted that it was not possible to change the delimitations of constituencies after the election schedule. He stressed the need of a local government system, saying that it could have helped the flood victims in a better way. The foreign minister urged MQM-P to contest the local government polls, pointing out that the PPP suffered ‘a lot of damage’ when they boycotted the election in the past.

He also urged the people of Sindh to exercise their right to vote, reiterating that the local government system can work for the improvement of the cities. “We are in contact with MQM-P to call out their voters to cast votes,” he added. Bilawal further said that he wants next mayor of Karachi from Pakistan People’s Party, adding that the successful ones should work for the development of the country. “We will work together with all parties for the development of Karachi after the election,” he added. It is pertinent to mention here that after MQM-P’s demand, the Sindh government announced postponing the Karachi and Hyderabad LG polls.